"I've worked on pitches that were literally make or break for landing IPs or funding, and all the while I was acutely aware that I wasn't the only one furiously figuring out a concept, a pitch and a prototype design. It's head to head, team vs. team, not unlike the massive guild-vs.-guild battles in MMOGs, and often there's millions of dollars at stake."

"Once I've made a game, there is no joy in playing it. Or at least the joy is a shadow of what I get from playing someone else's game. Part of enjoying a game is discovery and surprise. Having made the game, there is none of that. Mastery is another principle pleasure of gaming. After testing it for several hundred hours, I've mastered the whole damn thing."

That's true for writers as well. Faulkner, Lytle...none of those guys ever re-read their books after they'd spent months writing and revising. So much so that Faulkner couldn't remember the characters from all of his books after a while. 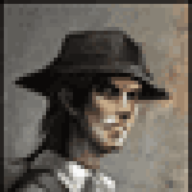 I can relate to the concept of creation requiring more than one man - my group and I have been devising a 13-part drama series for the 2nd year Uni project, and it really opened my eyes to the way an idea evolves and grows.

It was a little disheartening to hear some of the comments by professionals about who can and can't make a good designer, but hey, nothing ventured, nothing gained.

Back to the point, a good read. Nice work.
D

A great story and a compelling message. It rekindles the fire I feel to join the ranks of game designers and add my shield to that wall, but I'll admit it puts a bit of fear into me at the prospect of walking a path so fraught with trials. Certainly, it's a piece every aspiring designer (and I would wage many existing designers) could do well to remember.
A

"I enjoy making games more than playing games, and I suspect most professional designers feel the same way. In fact, for kids who say 'I want to be a game designer when I grow up,' this distinction is key for telling the real future designers from the wannabes. The ones who really want to be a designer are spending their spare time making games, not just playing them. The ones who still think that designers just come up with an idea - 'Let's make a game like Castlevania, but with lasers!' - and then go back to playing games full-time, are the ones who just play a lot and don't know the first thing about design." - Ian Schreiber, independent game designer and Adjunct Professor at Columbus State Community College
Click to expand...

If I may add my own thought to this sidebar, it requires a lot of self discipline though. I reckon that once you started the work, you can go on, keep working, go to sleep when people wake up, and end up tweaking your design and prototyped systems for hours. But getting this started is the most difficult part. Being independant is not easy. When you're working within a group, it's much easier to follow the flow, there's some emulation, a self support. But when you're alone, either at home or in a hotel, during the weekend, it's very hard to switch your computer on and start working, even if you actually enjoy what you do... otherwise, you wouldn't even think about doing it at all.
It's even harder when all the elements of a normal life in society require time to be dealt with.

Besides, there are many good games which need to be tried, at least. Even when making games, you should try new ones, and even force yourself, and even spend several hours on some of them to understand certain aspects relative to details which a superficial approach would miss. But this is not easy either, because of time restraints.
E

An interesting article on how game design and game logic can be applied to everyday work and events! Sometimes, it's smart to be reminded of these things. For instance, it's much more fun to work on something when you know how it fits into the whole product, why you are doing it and what it will achieve.

It's amusing how this article correlates with Heizinga's Homo Ludens. Sure, the main idea of the book was to describe our whole culture as a game, but it's interesting to think about game design in that way. For someone, for whom understanding main principles and properties of a game is a job, it's only rational to reap all the benefits of making the job itself into a game.
Making a game out of something yields additional possibilities and restrictions, but for someone who can say "Hey, it's my job! I know how to handle a game!" it's hardly a difficult choice.
Than again, recursivity is a great power, but that's a whole different story...
W

Great article, will be mailing the link out to our design grp right after this.
As a worker and as a manager in all kinds of industries, I always tried to put some game into the workplace...but never had the rationale so coherently stated as in the article. (It just felt like the right thing to do) Hopefully this concept will catch on and become accepted, experience shows there are anti-game fundamentalists who view anything pleasant as a pagan sacrilege of the 'traditional' humanity expunged workplace...even in game development. Thru the millenia people have used games to learn and ease tasks, its only in the last few hundred years of corporate workplaces that the institutions have tried to squeeze out the human factor. Even now game-ish style methods can brand a person as eccentric or un-businesslike, when in fact they generate superior results. Games ARE (literally) Fun, making games has to be fun too or the resulting product (the game) suffers. And yes I am deliberately ignoring the other kind of game known as office politics.
Show hidden low quality content
You must log in or register to reply here.
Share:
Facebook Twitter Reddit Pinterest Tumblr WhatsApp Email Link
Top Bottom