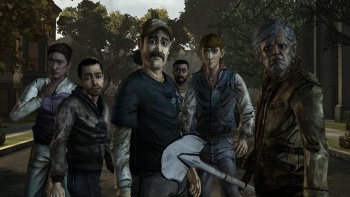 There's another episode of Telltale Games' The Walking Dead, and it's coming to the Vita version of the phenomenal adventure title.

In March, I reported on an imminent upcoming DLC for the title [http://www.escapistmagazine.com/news/view/122865-Telltales-Walking-Dead-Goes-Portable-On-The-Vita]. Now those two stories merge, as Sony opened today's press conference by revealing that the DLC, dubbed 400 Days would emerge alongside the Vita game at some point this Fall.

Almost nothing is known of the DLC - Sony wouldn't even offer any images for the addition - but we have to expect a relatively small price, and more of the same emotionally-wrenching horror that made The Walking Dead such a big hit in the first place.

Note that this DLC seemingly has no major link to the second season of The Walking Dead which, as far as anyone knows, is still slated to appear at some point next year. The aforementioned DLC could hypothetically be a Vita exclusive, but we doubt it, so expect the addition to appear on all platforms that support The Walking Dead alongside its debut (or, failing that, shortly after).

You...
you sluts.
I don't want a vita but dammit I want my Walking Dead.


Let's hope a western developer has the sense to not make their content handheld exclusive.
I

Gimme! I need my poor heart trampled underfoot once more..

Beat me to it, but yeah, Good news all around.

So rest easy folks, it's on all that the original game is on