"Anachronox was caught in the slow-motion explosion of a drama bomb. Ion Storm Dallas was busy eating itself, a process chronicled everywhere from NPR to Gamespot to our own magazine, and Tom Hall was caught in the middle. 'I had different roles at different times: Chief Creative Officer, President, etc. But, basically, I served as the Project Lead on Anachronox, and, where I could, as conscience of the company.' He blames Ion's collapse on the company's lack of focus, or rather, their focus on things other than game development. 'Once there was a re-focus on making games - boom, they got done.'"
Click to expand... 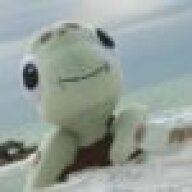 Aaaah, the sweet memories of having a whole planet as your sidekick. Or finding a rancid sock. Eddie knows.
B

So was the hinting at an Anachronox MMOG intentional? How about substantiated?
M

I've still got that game mint in a box somewhere. It looks fun, maybe one day I'll lose a leg or one of my spleens or something and I'll have time to play it.
S