A Heartbreaking Glimpse of a Steampunk Batman Game

That's hilarious. Sure it'd be a cool concept, but of course concept alone won't carry a game. I'd be a little more heartbroken if they released gameplay video and it looked fucking awesome.

I'm not too heartbroken since it's only concept art and nothing like a mind-boggling awesome trailer or something. I have enough Batman for now to keep myself occupied.

At the same time!

daemon37 said:
Steampunk is incredibly stupid. I'm very happy Batman will not be starring in this game. Steampunk usually just involves modern, or slightly futuristic, technology with a brass finish and some gears and pipes glued to it. Actually powering modern devices using steam is impractical to the point of absurdity, and to think it possible or even efficient makes you look very ignorant.

I mean come on people! How can you find crap like this appealing? 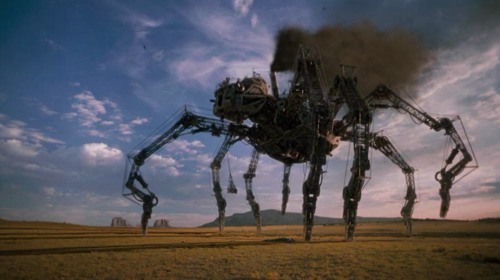 No obviously it's not realistic, but then neither are faster than light drives in science fiction, but the key word is here "fiction" the whole point of fantasy is a suspension of disbelief and just going with it, y'know FOR FUN. No body actually thinks it's plausible I don't know where you got that idea, it's just an aesthetic thing that a lot of people like and a narrative device for introducing advanced technology in eras where that technology wasn't available.

By that logic, any fictional genre is incredibly stupid.
Of course there are stupid entries in any given genre piece; that doesn't render the entire genre bad or unappealing.

For example: I hate "Otaku" in Shadowrun (kids who can deck without a cyberdeck because they're...*sigh* "Children of the Internet"). I hate Magical Children and ghosts living in the Internet (called the Matrix, and yes, Shadowrun predates the film with the same concept), as it betrays the entire theme of Tech-vs-Magic inherent in the setting.

Shadowrun is about as Cyberpunk as it gets.
Do I hate all Cyberpunk because of this and say it's all stupid? Of course not!

daemon37 said:
Steampunk is incredibly stupid. I'm very happy Batman will not be starring in this game. Steampunk usually just involves modern, or slightly futuristic, technology with a brass finish and some gears and pipes glued to it. Actually powering modern devices using steam is impractical to the point of absurdity, and to think it possible or even efficient makes you look very ignorant.

I mean come on people! How can you find crap like this appealing?

What the living shit?

You know, I'll go back to Star Wars and Skyrim then, cause I only ever play things that could definitely happen in real life.

Don't even particularly like batman that much, but I love this premise!
T

I have mixed opinions of the idea. The thing is that elseworlds type stories are fine as short one shots, but they generally aren't expanded into larger scale works or leak into the main continuity more directly because what is cool in small doses doesn't hold up in the long term. The longer something goes on the more you have to examine it and get into the nuts and bolts of something, and in many cases that leads to something not intended for that level of development falling to pieces and getting quite stupid.

What is currently called Steampunk (which is NOT actual Steampunk, but that's another discussion) hasn't seen more treatment because the stories it's trying to emulate were based on concepts that were later disproven, impractical, or outright non-functional to begin with. The more you focus on it, the more increasingly absurd it happens to get... which is why it works well for one shots, and short bits here and there. The best ongoing concepts in the genere, like say "Space 1889" which held on for a while, tend to not be successful in any traditional sense because to hold up to large scale development they wind up having to develop entirely alternative forms of logic that will twist the brains of all but the most hardcore nerds for them to make any kind of sense. "Space 1889" for example uses the logic that the old pseudo-science of Ether (which used to be a big deal) was real, and as such it changed the entire development of technology. This being the same Pseudo-science referanced offhandedly with the "Sons Of the Ether" faction in the old "Mage: The Ascension" RPGs.

Steampunk Batman really isn't going to be the Batman most people recognize, and the setting is really going to warp the character beyond most recognition. Not to mention when your looking at presumably dozens of hours of gameplay the novelty of something like that is going to wear off a lot faster than even those who are fond of the idea might think.

To be honest while "Gotham By Gaslight" was okay it's not my favorite Batman elseworlds. Truthfully if they were going to re-visit alternative Batman concepts I was more fond of the whole "Haunted Gotham" set up, which was actually framed as a sort of lead up to a series that was never going to exist. Not to mention one of the sword and sorcery Batman concepts where he was the one man who didn't use magic (as opposed to not using guns) where all the other super beings were magic themed now... instead he used science. Of course neither of those would work for the same reasons as Steampunk Batman. Still, I imagine Haunted Gotham would be a good justification for the Resident Evil school of survival horror... I mean sure, the bad guys are really fugly, nasty, and powerful... but your pwning them with violence despite the trappings because your playing the goddamned Batman.


That said I think we've seen enough Batman recently, I'd kind of like to see some serious attempts to do other super heroes. Games like Prototype and Infamous have shown it's quite possible to work with actual superpowers nowadays as opposed to creating a glorified brawler. I think Batman has been popular because his capabilities make him relatively easy to develop a good game for.

Looking at games like say City Of Heroes, or Champions Online, as well as things like Infamous it occurs to me that the technology exists to create a single player sandbox super hero game where you could either create your own character and have a more story driven experience than those MMOs have allowed so far... or deal with a situaton where you could choose to play as a lot of diverse characters. Imagine say "X-Men Legends" except done like inFamous.