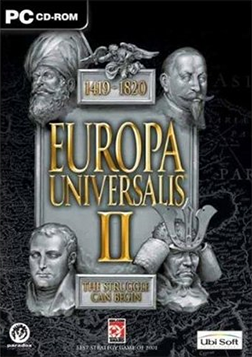 The Europa Universalis Series is, in many ways, quite remarkable. Don't let it ever be said that the developers, Paradox Interactive, haven't got any ambition, because you will certainly find such an ingredient by the bucket-load with the games that they produce. Couple this with a healthy sprinkling of innovation and a definate layer of depth and complexity, seldom seen in many games these days, and you get a fun and rewarding gameplay experience, if hindered by a few bugs. Although, the sheer scale of the behemoth at hand may certainly ward of unprepared gamers, ignorant of the strategic depth it provides.

So what is Europa Universalis II? Well at its core, it is a strategy game. To better give the genre that Paradox Interactive near-created the credit it deserves, it is a Grand Strategy Game. So called because, yourself, as the omnipotent force that the game allows you to be, can become the ruler of any country of the world. For those of you who know your history, in 1419 - the year the game starts - that is a lot of countries and, by the end of it, the globe of our lands will look decidedly different for each player by the time the games end date comes around, 1820. So for just over 400 years you can take a nation through its course, the joy with this game is that history will, more often then not, not repeat itself. You could play as Sweden for example and become the pre-eminent power in mainland Europe. Neither could England become the great colonial power it was destined to be in the real world if you thwart its plans by playing as France. The point is, you rule a nation and can take it on any course you wish, pursuing religious change, colonial power or good old world domination - and a lot more. 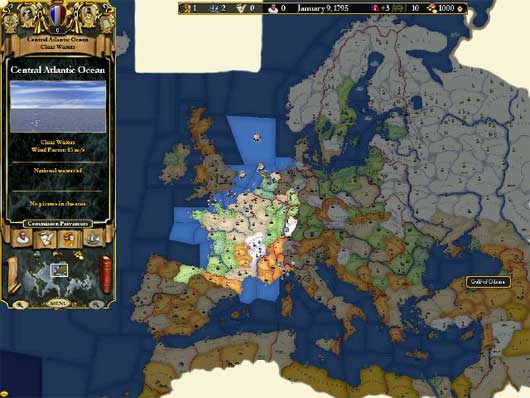 The interface is, however, not the most intuitive or easy to use. But once mastered, it will not be a worry. You can use keyboard commands for essential actions such as pausing the actions, or indeed speeding it up. EU2 is not a turn-based game, it is real-time. This is done so by moving your armies across the map, with travel time between each province. Combat is initiated by using your armies to attack an enemy province. Initiating battle will see your armies face off against your opponent, with a morale meter aiding the outcome. You have no direct control over the battles, you merely send your armies against the enemies. The outcome itself is determined by factors such as army size, morale and the terrain it is attacking from and in. As a point of reference, imagine Civilization 4 - but instead the armies are represented by one unit. There are, however, three unit types. Infantry, Cavalry and Artillery. Some remain unavailable until the technology needed to employ them becomes researched.

Research itself is represented through five bars. Trade, infrastructure, land, naval and stability. All of which, bar stability, are researched over time by the player allocating funds from the treasury. These funds are further gained through war, taxes and province control. Stability instead build gradually and, upon reaching full, you gain another stability point, with a maximum of three. Stability itself dictates the chance of revolt in each of your provinces and is affected by conflict, taxes and religion. If the research and combat sounds simple, the trick in practice is balance between fielding an army limited by the strength of your nation with how much research you invest to improve aspects of your country.

EU2 will last a long time, by which I mean a fully fledged game will go on for hours and hours. If this doesn't suit you, then there are shorter scenarios to play and you can choose to start the game in different time periods. The nations and global map will follow suit whichever time period you choose to play from, all historically accurate. The learning curve is like trying to climb a vertical wall made of grease at times, and a gentle slope at others. Mainly the former. The challenge will come, for a newcomer, from managing your economy and being able to field your men without going bankrupt.

You further have many means by which to rule your nations, although EU2 does not go into detail, after all - it is about grand strategy. You can however change relgions (At the risk of widespread anger) or focus your nations efforts into different areas. I.e, land warfare over naval. Included in the game is also an easy way to monitor stats as the game progresses. There is a large number of nations so it can be cool to compare all of them at the time of playing by military size, or geographical size for example. 'Winning' is a matter of gaining points. This is done through successful diplomacy, winning wars and many more. there are also 'missions' available in game, i.e, hold a certain province for X amount of time. Or, conquer Province X. Diplomacy is also quite deep, you can bribe nations in your favour, send them threats, appease them with gifts, initiate war, offer trading deals and forge alliances.

Visually, many will be put off by the bland map and ugly sprites. But once you get into the swing of things it is surprisingly immersive. This mainly comes from the enjoyment of ruling a nation and the attachment gained from leading it through history. The music gets annoying, but it can be turned off (And I suspect replaced with your own tracks such as in most PC games). The sound effects are fine, but get irritating after hearing them so much, but they don't detract from the experience enough to be considered a major fault. The multiplayer is alive and kicking with a strong, die hard community. But, for many, the singleplayer will be more than enough. Due to the difficulty, it can be hard to imagine going up against fellow humans.

In concluding, EU2 is a thrill to play. There are a few and far between amount of bugs and smaller issues and, it can be hard. But ultimately playing through this will be extremely enjoyable if you can handle the complexities (And there are tutorials in-game, friendly forums and various guides on the internet to lend a helping hand.) The pleasure comes from watching your nation grow and progress. Lets face it, who doesn't want to see Iraq become supreme rulers of Europe?! It will be hard, and the pace at times slow, but if you want something deep and complex to sink your time into - then look no further.

I'm looking into EU3.
I don't see much point in going for #2 first.

veloper said:
I'm looking into EU3.
I don't see much point in going for #2 first.
Click to expand...