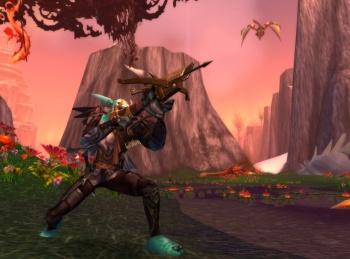 Investment firm Lazard Capital Markets has picked Activision-Blizzard for its top technology stock of 2009 - the only gaming company on the list.

In a research note published Thursday, the analyst firm said that shares of the gaming giant were as safe a "relative haven" as any for investors looking to buy stocks in the upcoming year amidst the economic downturn. Activision-Blizzard beat out established and well-respected companies in the tech sector for the top pick such as Cisco Systems and McAfee, and was the only gaming company on the list of 13 - of course, given that the other choices were in fields like energy, transportation, and health care as well as technology, perhaps that isn't exactly too surprising.

Lazard's reason for including the publisher in the list is as follows: "The [Activision Blizzard] shares are attractive based on industry-leading operating margins, a diverse online and offline revenue base, several of the strongest videogame franchises, and a depressed valuation following the recent market downturn."

Read: Activision-Blizzard has print money [http://hub.guitarhero.com/index_us.html]. So their presence on the list ... well, when you think about it, it's not really as unexpected as one might have guessed. Beating out the old standards, though? That's a sign of triumph.

Of course, let's hope investors aren't banking on profiting from Diablo III any time in 2009. On the other hand, the first part of StarCraft II might see a release. Might.

No doubt about it.

Activision Blizzard isjust going to get bigger and bigger with WoW how it is and Starcraft II coming out. Diablo III I think will hit in 2010, but why not invest now? CoD:WaW will keep going as long as people are interested in their persistent online characters. If they're involved in publishing Doom 4, and Guitar Hero remains popular (which it should), they're a sure bet.