After a Decade, Rosetta Probe Prepares for Comet Landing

After a Decade, Rosetta Probe Prepares for Comet Landing

The European probe begins the year-long process of finding a parking spot. 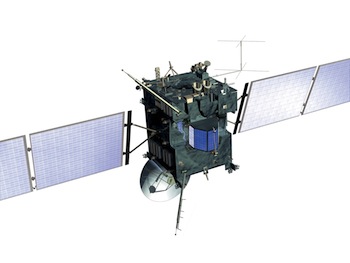 Comets are the anarchic beasts of the galaxy. They travel about, paying no heed to the laws or orbits of others, destroying lives as they go, much like the men who chase them. Ok, everything I know about comets I learned from Ray Bradbury's [a href=http://www.youtube.com/watch?v=bjTZWtq59f0]Leviathan '99[/a], which is good enough for me. However, it's not good enough for science. To that end, the European Space Agency launched the Rosetta probe to land on a comet and see for itself. After almost a decade in space, the probe is [a href=http://www.washingtonpost.com/world/europe/europe-aims-for-1st-comet-landing-nov-11/2013/12/10/9194d862-618f-11e3-a7b4-4a75ebc432ab_story.html]waking up[/a] from a deep sleep and preparing to make its final approach on the great comet 67P/Churyumov-Gerasimenko.

Now, the time for waiting is over. On 5am EST, January 20th, the Rosetta will receive the wake-up signal and proceed onto the next phase of its mission. Once the probe is determined to be fully functional (which is still unclear at this point), it'll fly closer to the comet and take pictures, while the team back on Earth determines a good spot to land on the 2.5 mile-in-diameter comet. Then, the lander will drop to the surface and stay attached, despite the weak gravity, via harpoon. If everything goes as planned, that won't happen until November 11th. Space missions are nothing if not methodical.

From there, the lander will drill into the surface of the comet and analyze exactly what's in this ball of ice and rock. The finding should prove to be interesting, as comets remain largely untouched since first forming. "This time capsule's been locked away for 4.6 billion years," said ESA's director of science Mark McCaughrean.

Launched by the European Space Agency in 2004, the Rosetta has performed three fly-bys of Earth and another one of Mars, using gravity as a slingshot so it can catch the 67P comet, which orbits the sun at about 62,000 MPH. During the last two years, it's been in hibernation mode to conserve energy and allow the ESA fix various glitches, like a helium leak in a maneuvering thruster.

10 years ago we had the tech to build a thing and slingshot it out to a comet, where is our moonbase get our shit together humanity =D. cant wait to see what this thing learns

Harpoon!!! Even Armageddon didn't have that: Yeeehaaawww!!!!
W

well, they basically only get one shot at this, so why rush it

I'm predicting a failure of some sort. Seems to be a theme with space probes lately
S

Nurb said:
I'm predicting a failure of some sort. Seems to be a theme with space probes lately
Click to expand...

Only where Mars is involved. The rest tend to do swimmingly.

joeman098 said:
10 years ago we had the tech to build a thing and slingshot it out to a comet, where is our moonbase get our shit together humanity =D. cant wait to see what this thing learns
Click to expand...

That's the interesting thing about space exploration, we actually have the tech to do quite a bit of neat stuff, but are hindered by the cost in money and time. We're always hearing about stuff like this, a probe launched a decade ago, or about the Voyager program, which started back in '77. Things take a long time to plan and a long time to execute. I mean... we went to the moon over 40 years ago- we were capable then, and look how much technology has increased, but still not to the point that it's cheap or fast to do awesome stuff like this.