Among the Sleep Wakes Up Next Week

Among the Sleep Wakes Up Next Week


​
Among the Sleep, the horror game that plays from the perspective of a two-year-old child, has rolled out a brand-new trailer to mark its impending launch.

I've been paying some serious attention to Among the Sleep, Krillbyte's fascinating indie horror game, but even so the release date announced today came as something of a surprise, because it's happening a lot sooner than I expected. The game will arrive on PC, Mac and Linux on May 29, just one week from today.

Among the Sleep is unusual because its central character is a two-year-old child, caught in a surreal, horrific world, all alone but for his teddy bear. It plays out from the first-person perspective, but with a rather lower point of view than you're likely used to, and with some mobility issues (and advantages) than only a toddler can bring to the table. Jim Sterling previewed [http://www.escapistmagazine.com/videos/view/jimquisition/7174-Bonus-Jimquisition-Among-the-Sleep-Preview] the game last April and said he "thinks it has serious legs" and looks "pretty damn promising."

There's no word on when the recently-announced PlayStation 4 version [http://www.escapistmagazine.com/news/view/134479-Among-the-Sleep-Expands-to-PS4-and-Project-Morpheus] might be ready to go, but I wouldn't be surprised to see Sony make some noise about it at E3. In the meantime, to get a better idea of what's in store, have a look at Krillbyte's new "release date announcement trailer," which I think looks pretty spectacularly good - warm, colorful, full of magic and cree-hee-heepy. "A child shouldn't have to go through this," the man says. Neither should I, probably, but you know it's going to happen.

Well, this game looks set to bring out my inner child. And by that I mean I expect it to make me wet myself and cry.
S

In all seriousness, this looks like a fantastic game, and seems like an inevitable progression from other survival horror games. On one end of the spectrum, we had the sort of horror games that involved shotguns, machine guns, and generally the ability to annihilate the so-called terrifying monsters with surprising regularity. Then we saw the rebirth of true survival horror games, where all your character was generally armed with was maybe a camera, and a keen familiarity with cupboards and broom closets. And now we find ourselves on the other end of the spectrum, where not only are you presumably lacking in any form of weaponry or defense options, you're also an exceedingly fragile and helpless two-year-old child who, at best, will only be able to toddle away from danger.

Not sure how anyone will top this in terms of helplessness. Maybe the next horror game will involve you playing a gerbil. o.o 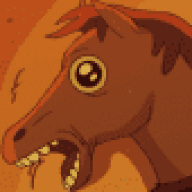 SeventhSigil said:
Not sure how anyone will top this in terms of helplessness. Maybe the next horror game will involve you playing a gerbil. o.o
Click to expand...

Horror games have a lot of ability to comment on the state of the games industry and gaming culture. Two examples are a horror game where you play as a shooting victim, having to manage blood loss, potential loss of consciousness, etc, as well as having limited mobility. My personal wished-for game is a horror mystery where the main character can't understand why the world around him is so simple and limited and seems to be made up of polygons instead of being real. And then he hears about a mass murderer calling himself "the hero" with supernatural powers such as immortality and time travel. He slowly comes to the horrifying realization that the world he lives in has demonized him and his friends and made them death fodder for "the hero", their deaths serving merely to make "the hero" a more powerful killer than he and his supernatural powers already make him. In a race against becoming just the latest murder victim he may discover the "final" truth - the player, developer, and publisher behind the terrifying world he lives in and who created and maintain "the hero". He then frantically seeks to share this truth with others, but their severely limited dialogue trees make that impossible. In deep despair he seeks to communicate and explain himself to "the hero", but the "fire and forget" mentality of the player behind "the hero" makes that impossible, and he mows down just another monster, gains a level and gets some loot. Other possible game endings include "the monster" modding the game itself to make it unplayable by the player, thus saving the world from additional ravages of "the hero".