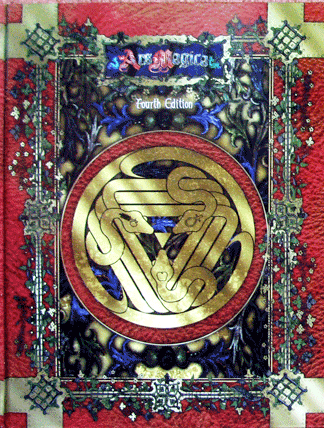 With five published editions since 1987, Ars Magica has proven to be both a successful and unique tabletop game. Unlike the usual fantasy landscape of a Dungeons and Dragons campaign, Ars Magica drops players into a historically-grounded Medieval Europe where Hermetic magic is a fact, not folklore. This allows history buffs and fantasy magic fans to play together at the same table, something that's easier to do <a href=http://www.warehouse23.com/products/ars-magica-4th-edition-core-rulebook>with the fourth edition rules available for a free download. Now Bundle of Holding is helping expand your game with a collection of out-of-print Ars Magica supplements, focusing on the British and French regions of its Mythic Europe setting.

Outside of the Ars Magica core book and an introductory support kit, Bundle of Holding is offering five books with its current selection. Heirs to Merlin: The Stonehenge Tribunal details the magical history of England and Wales from King Arthur to the death of Thomas Becket, creating backstories for Ars Magica orders. Triamore: The Covenant at Lucien's Folly provides a potential home base for player characters in a medieval manor closely tied to the politics of the region. For GMs, A Medieval Tapestry is a 160 page volume of NPCs to add into any game, while the Medieval Bestiary lists monsters as they were described by 13th Century scholars. Of course, no magic game would be complete without a Wizard's Grimoire, detailing spells as well as Hermetic laws, politics, and laboratory research.

These books were designed with Ars Magica's Fourth Edition in mind, but they're also compatible with the Fifth, so you shouldn't need to worry much about converting stats if you've upgraded. The Ars Magica bundle runs for another 8 days, so its pretty likely that additional books will magically appear over the course of the week.

If only I knew anybody in real life to play stuff like that with. Most of those people have zero interest in RPGs and tabletops and so on.
I know there are some online groups that use chat or Skype, RNGs and other virtual aids like interactive maps to play P&P games over long distances.
Is there such a group on The Escapist by any chance?
Show hidden low quality content
You must log in or register to reply here.
Share:
Facebook Twitter Reddit Pinterest Tumblr WhatsApp Email Link
Top Bottom