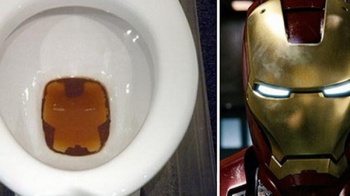 A portrait of Iron Man rendered in a toilet bowl using human urine has ... ugh, taken the gold in a Taiwanese art competition.

Andres Serrano [http://en.wikipedia.org/wiki/Piss_Christ] can now retire, safe in the knowledge that at least one other artist is using his own bodily fluids to delight art fans and nauseate everyone else. When an art school graduate, Wong Tin Cheung, noticed blood in his urine, he was inspired to visit his studio rather than his doctor.

The artist, who apparently has a sizable collection of Iron Man products, took around two months to find a toilet bowl in the shape of the iconic character's head. Once he found it, he armed himself with a collection of edible pigmentation and, oh god, produced the piece in time for the competition. He used his saliva to touch up the artwork, and he apparently had to keep adding spit while waiting for the competition officials to finish examining the other entries.

The piece, dubbed "Blood Urine Man," was a hit with the judges, who awarded it first place. The competition had over 600 entries from different artists. I was going to end this with an easy "taking the piss" gag, but the fact someone, somewhere, looked at a drawing of Iron Man done in human urine and said "This is good, I like this," has broken something inside me. Congratulations, art.

I will pray that Kathleen from LRR won't read this (she doesn't like spit).

Good god Taiwan, maybe you do deserve to be crushed by Chinese oppresion.

(Just kidding before anyone takes that seriously.)

[insert silly remark about a country you probably know nothing about]

This is the problem with modern art... 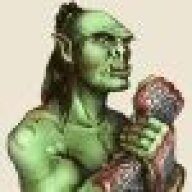 Fully aware of the overuse of the word, this is awesome.

Also awesome, captcha for this post: "ear candy". Looks like the escapist has funny uses for bodily fluids as well. I feel so classy right now.

Oh, Maker. See, I'm trying to get a Minor in art. I'm trying to understand art overall better, other than just animation, which is my area of expertise, so to speak. But...ugh, I just find this gross. Kudos to the guy but...it's piss mixed with blood. And then he added saliva. And then he played with it until he got this. UGH!

Again, kudos but...it's still gross. But I know this is the kind of stuff my teachers would either go crazy about or hate it immediately (Because it's a picture of Iron Man, and that's it).

"Blood Urine Man" needs his own comic.
Try and guess his superpower

Sounds like someone takes their art a wee bit too seriously.

No doubt he was eager to hear the words, "Urine the final 3!".

Does he consider it his piss de résistance?

This is ridiculous. That is all.

So, uhh, is there a video which shows the process of making this?

I'm sorry but that really is just god damn impressive. That totally deserved first place if only because it's really god damn impressive he drew that,with his own urine. I'm not saying it's good art, but it's definitely thinking outside the box which is something I believe budding artists are encouraged to do. I mean any art student can draw, paint, or sculpt a piece of work, but how many of them could pee a picture?