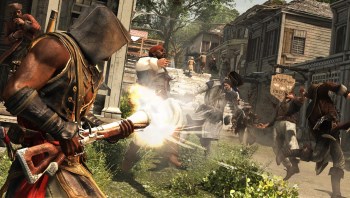 The PC version of the new Assassin's Creed IV: Black Flag DLC may or may not be available by the time you read this.

The Freedom Cry DLC for Assassins Creed IV: Black Flag launched yesterday [http://www.escapistmagazine.com/news/view/130625-Assassins-Creed-IV-Freedom-Cry-Screens-Launch-Trailer-Revealed] and it sounds pretty cool. Set 15 years after Black Flag, it tells the story of Adewale, now a pirate captain himself, who sets out to free the slaves of Haiti after being shipwrecked on the island. But for the moment, it seems that Adewale's adventures are limited to those who own an Xbox or a PlayStation.

"The PC version of the Freedom Cry DLC for Assassin's Creed IV Black Flag will release in the coming days," Ubisoft said in a statement on the Assassin's Creed forum. "We are taking the extra time to apply a final layer of polish to ensure that it meets the expectations of our fans."

Oddly enough, Freedom Cry is listed as available on Uplay [http://store.steampowered.com/app/264803/] service. At this point the status of the DLC is unclear and I can't try it myself (not an Assassin's Creed man), so if any of you folks have managed to make it work (or not), feel free to fill us in on your experiences on the forum.

This doesn't surprise me in the least. Ubisoft has never released anything on PC in a timely fashion.

Is it because... they're further "improving" the PC port right?... RIGHT? Fuck you Ubisoft...

By now I'd be more surprised if they realised something on time for the PC.
U

Another odd thing about it being on Steam, I have the season pass and Freedom Cry is supposed to be included in that, but Steam is showing me that I need to purchase it.

Don't worry guys, they're just polishing it. Ubisoft knows what's best for us PC gamers. I'm sure the experience will be even more thrilling on PC. We'll see it in the next coming days. What? No I don't work for Ubisoft, what kind of accusation is that? Quit looking at me funny!