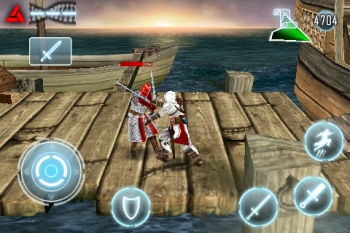 Everyone's all about Ezio, the new protagonist of Assassin's Creed 2, these days. Yes, he's pretty cool. He can swim, he can glide, he has two wristblades and he doesn't have to go on eavesdropping missions, but he's still no Altair. I mean, his name is way less cool for one.

Anyone on the same wavelength as me? Right on. Altair lovers like us can check out Assassin's Creed on the iPhone and iPod Touch, which stars our favorite 12th century badass on a quest to steal "The Chalice" from rival shadow organization The Templars and end The Crusades.

According to IGN [http://wireless.ign.com/articles/971/971971p1.html], the game's based on DS title Altair's Chronicles, but it looks like it's gotten a minor facelift in its move to Apple's handhelds. The 3D-rendered graphics look nice and crisp, that's a plus, but as for the actual gameplay, which involves the typical AC formula of parkour, stealth kills and swordplay, we're always a bit skeptical when touch screen controls are involved. Looks like you control Altair with a analog stick-esque icon on the left and perform actions by tapping icons on the right. Could work, could not.

Also, Gameloft says that the game will have "skill-based minigames that test your patience and dexterity" like pick pocketing and interrogation. If it's anything like Assassin's Creed proper, they might definitely be right about the patience part.

In any case, if you haven't played Altair's Chronicles and own an iPhone, it could be worth looking into. Gameloft hasn't figured out pricing yet, but IGN wagers it'll be between $6 and $10 for a 3-hour game.