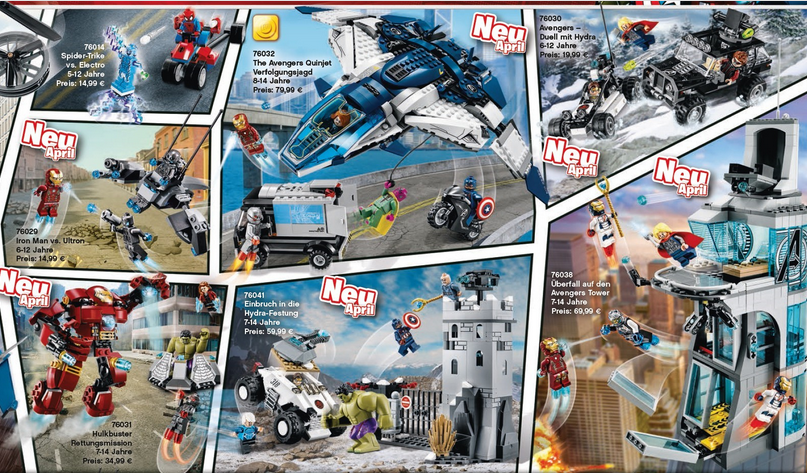 A newly released German LEGO catalog contains a first look at a new line of construction sets based on Avengers: Age of Ultron.

The catalog, posted in its German form to the LEGO Group's servers last night, contains a page detailing the prices and contents of six new sets that will release in April 2015, a month ahead of Age of Ultron. The sets (view-able on pages 68-69 of the catalog) will include the following:


While the sets themselves look like a lot of fun on their own, several might also include small details about the movie itself. It's worth noting, for instance, that the LEGO Hulkbuster set has been dubbed a "Rescue Mission." We also find it interesting that Ultron himself comes in varying forms across the different products, something that suggests that he'll develop and change over the course of the film. We're also willing to bet that the Raid on Avengers Tower is based on an actual sequence from the film; perhaps following the verbal confrontation showcased in the film's <a href=http://www.escapistmagazine.com/news/view/138169-Avengers-Age-Of-Ultron-Trailer-Leaks-A-Week-Early>trailer. It should be noted, of course, that not every Marvel LEGO product is based on actual scenes from a move. Even so, it's still fun to speculate based on these toys.
[gallery=3649]