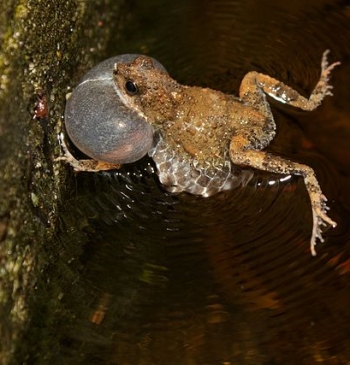 The love songs of male túngara frogs attract their own predators.

Looking for love in the Central and South American rain forest can have some unintended consequences for the túngara frog (Physalaemus pustulosus). At night, the male túngara frog picks a shallow pond and Science [https://www.youtube.com/watch?v=r4ETSoWjDh8], found that hunting bats (Trachops cirrhosis) are able to detect the ripples and use them to target the frogs. Túngara frogs will stop singing when they notice a bat overhead, but the ripples continue for a few seconds after a frog stops calling. The bats use the frogs' call and the resulting ripples to find their prey.

Researchers from the Smithsonian Tropical Research Institute, Leiden University, the University of Texas at Austin, and Salisbury University conducted the study. The researchers first looked at how the male frogs responded to the ripples created by the songs of their rivals. Male frogs have a zone that they will defend that is a circle about six inches wide. If a frog hears a rival's call and senses ripples outside of his zone, he is more likely to double the rate of his own call than if he only hears a rival's call. If the ripples are inside their zone of defense, the male is more likely to stop calling and deflate his own vocal sac, which the researchers believe may signal that the frog is getting ready to fight his rival or flee.

The researchers then tested how hunting bats responded to the ripples. Using model frogs, the researchers offered the bats two targets: one that only sang the mating call, and one that both sang and generated ripples. Both models stopped calling once the bat was overhead, just as the real frogs would. The researchers found that the bats preferred to attack the frog models that generated ripples. This behavior suggests that the bats are detecting the ripples and using them to target the frogs. The bats are most likely using echolocation to detect the ripples.

The study is an interesting investigation into the unintended effects of communication. What starts as a mating call to attract a female frog also alerts rivals and predators to the male frog's location. Overall, frog dating sounds pretty dangerous. Haven't they heard of OkCupid?

"Ripples"? These bats have been taught by The Great Zeppeli!

Does that mean Bats are essentially the Frog version of Jason Vorhees?
R

Aeshi said:
Does that mean Bats are essentially the Frog version of Jason Vorhees?
Click to expand...

OT: Basically, the frogs call their predators, the weak ones get eaten and the strong get to mate. The circle/tetrahedron of life.
W

The bats would also probably be on okcupid. Watch out, daters!
T

Ain't that always the way? You're just serenading your girl when a giant winged monstrosity swoops down, carries you off to its lair, and eats you. I freakin' hate it when that happens.

Plus those bats are douchebag c---blockers. You don't eat a guy when he's just about to get his thang on! That's just not right.

Your days are numbered, pal, 'cause Batman is on the prowl!

Still, not surprising. Ya make a sound and bats just know where the hell you are as is. Ya make water ripple too and it's like active sonar on a submarine, letting the enemy get an active firing solution on you.