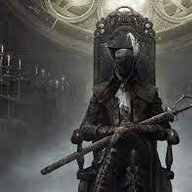 Ok I blasted through this game over Thanksgiving weekend. And, you know, it sure is a Bayonetta.
So yeah, it was what I expected of course, so no complaints, but also nothing that knocked my socks off. It is what it is, which is fine.
I think my play style and the game's strengths are incompatible. At least in terms of combat- which let's face it is kinda the whole point here- I play to move along the story, I don't care about getting good grades so much. I mean, I try my best, but I want to move on to the next battle or set piece not retry fights.

So early on I was able to buy practically infinite healing items which the game allows you to stop and consume at will, effectively giving me god mode and making combat boring very quickly. I was able to beat the game mashing X, doing anything else purely to relieve myself of boredom and see fun animations. "Side" content was completely uninteresting as it's just more of the combat but more annoying and the upgrades are superfluous. Yes, I know I can up the difficulty but I just don't do that on first (or only) play-throughs and that feels like a way to make up for the poor balance of the game (that's how I feel about game difficulty in general not just Bayonetta).

The Viola sections were a very mixed bag. I loved Cheshire, and the fact that Viola and Bayonetta's use of demon summons are different is the kind of variations of gameplay that works really well for me. The parry instead of dodge for witch time was, for the first half of the game, really great, 'cause I love a good parry system as my multiple play-throughs of Sekiro will attest. But then in the second half they threw more enemies that popped around in various directions and shot bullets which made parrying impractical, so I had to resort to spamming dodge and hating the no longer effective parry.

This sort of confusing, crazy, often terrible melding of progression and mechanics has always been one of the quirks of the series and it's like one of those things I love-hate about it. What a mess. Bayo3 is either the worst offender or just the most recent but with all the demon summons, three different characters and play styles, weapons and throw in the occasional QTE or insta-death chase sequence or whatever and there's just no time to master a rhythm here- unless, of course, you replay stuff, which I don't do.

The plot is stupid but I already new that going in and I don't care so much, though I will say that 2's ending and the fact that the third looks the same- graphically, technically- as the first two does give the game a whole feeling of being like a huge DLC. But I like the trappings of the third, especially the parallel universe Bayonettas. It's like a fanboy fashion show and I loved it. I liked all of them and I would want a DLC with each- problematic orientalist Bayo, teeny weeb skater grl Bayo, and especially top-hat wearing PrestigeIllusionist Bayo. Oh well.

The demon summoning was cool- the train and clocktower ones are wild, I though having demons that were, like, objects, was a lovely idea. I beat the final bosses with a clocktower punching them and it was hilarious.

My one big "mistake" was playing this after that absolutely breath-taking Ragnarok. Both go for that fast action+story thing, so they're similar in my head space for that reason, and Ragnarok is much more fulfilling and awesome that it really highlights how Bayo3 is just a pretty decent action game for like 5-10 years ago.
I didn't think I'd "feel" how old this game feels but I did.

This will be my last game on the Switch platform as I have no interest in any other Nintendo only franchises so I'll be moving to the Steam Deck for my handheld gaming.

Stuff about the ending and future games:


Bayo3 ends with the statement about the next one happening on "the next generation" which is clearly a double reference both to the fact that they want to retire the title character (marked by the MULTIPLE end credit dance sequences, lol) and having to make games for the current Switch.
Bayonetta is the most fun new franchise of the year- I played all 3! And I'm done with it. I mean who knows in the future, obviously, but even if Bayo4 comes out on newer console(s) I do have, they're going to have to really change things up to capture my interest. I am feeling that way about all my franchises so I'm not picking on it, it's just what it is. Personally I would absolutely NOT recommend this game to anyone who hasn't played the previous two, because they're all same enough but the previous two have more charm and heart. I would absolutely recommend it to those like me how already played the previous ones and like the character and gameplay.
Reactions: BrawlMan

Old_Hunter_77 said:
My one big "mistake" was playing this after that absolutely breath-taking Ragnarok. Both go for that fast action+story thing, so they're similar in my head space for that reason, and Ragnarok is much more fulfilling and awesome that it really highlights how Bayo3 is just a pretty decent action game for like 5-10 years ago.
I didn't think I'd "feel" how old this game feels but I did.
Click to expand...

Ragnarok does have the better overall conclusion, but Bayo 3 still has the better gameplay. Though I didn't find it ending as terrible as most fans and shippers make out to be. My problem with Ragnarok is the same I had with the previous game, the forced walking sections that go on for too long and just should have been a cut scene. Bayonetta 3 has a similar problem, though its forced walking only last for about 10 to 15 seconds, but there's at least 10 of them peppered throughout the game. This game I still find better than the original Bayonetta game in term of weapons, set pieces, and more open level design.

Old_Hunter_77 said:
Bayo4 comes out on newer console(s) I do have, they're going to have to really change things up to capture my interes
Click to expand...