Beats is a downloadable music game for the Sony PSP that comes with a set number of default tracks, and the ability to play (nearly) any song currently stored on your Memory Stick. The game comes in four difficulties: Novice, Normal, Hard, and Extreme, and has various themes in case your aural/aesthetic choices differ from the defaults. The gameplay involves one (or several) of the PSP's four buttons to come from off-screen toward one (or three for the higher difficulties) gray zones on screen. The the button arrives at the correct place, you press the corresponding button on the PSP. Simple concept, made more difficult when you must concentrate on three different hit zones (which must be selected by pressing left, right, or the middle by not pressing a direction at all).

Overall, simple gameplay makes it an easy game to pick up on, and a challenging enough one to run with once you've really sunk your teeth into the gameplay and difficulty ratings. 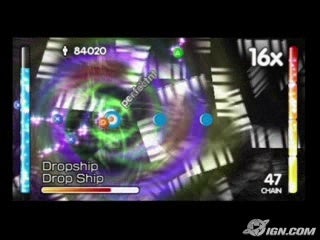 By using the Star Power... er... Overdrive mode, you increase your score multiplier.

Graphically, the game does its job, and does so well. The simple but stylish graphics keep the peripheral eye entertained but not cluttered, especially when you have buttons coming from three sides of the screen. The game has several styles of "Light Explosion" effects that happen when you activate your Overdrive, or for when you just hit one of the buttons correctly, so you won't feel stuck with something you dislike.

Beats is simple and imaginative, but pales somewhat to other PSP rhythm titles.

Although the music-to-gameplay detection is quite a bit smoother than other [http://www.gamespot.com/ps2/puzzle/dancefactory/review.html?om_act=convert&om_clk=gssummary&tag=summary;read-review] titles [http://www.audio-surf.com/] of the same genre, it still falls to the same prey as games like it do. Really, since the gameplay is derived from elements found in all music, no matter the song you pick, the gameplay will still feel repetitive.

That's not to say the songs aren't different, but instead that the gameplay can feel repetitive and monotonous, especially after several hours of play. Although, that's just a result of too much playing, something that happens to every game.

Really, though, Beats is a game that plays a lot like a casual game with your music. Fun for a few hours, not one of those games you should really plan on hardcore binging.

Overall, the simple gameplay, casual appeal, ability to have a custom soundtrack (and a functional one at that), and have it all on the go is a strong one. It's a pretty solid game for what it is, and only costs $5 (USD). So if you're a music-game buff, or you just feel the need to play your own music once and a while, this is a good game for you. If you don't particularly like music games, or own a really small memory stick for your PSP, I'd say keep some space from this one.

If you're into this kinda thing, buy it. It's fun.
B

I would be very tempted if I owned a PSP, if only for the ability to play my own music. You dont know how many people I would kill to be able to get some of the songs off of my hard drive into Rock Band, or any music rythm game really. But, on the subject of your review, id say it was very like the game: Resonably short, and to the point with a few pictures to keep it from being boring, but not distracting us from the real action: Your review.
Show hidden low quality content
You must log in or register to reply here.
Share:
Facebook Twitter Reddit Pinterest Tumblr WhatsApp Email Link
Top Bottom