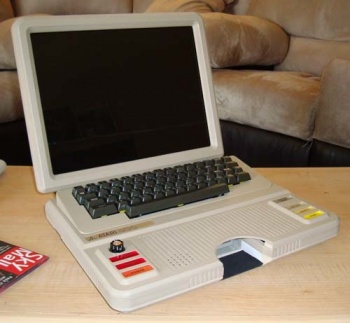 How do you make an Atari 800 seem hip and new? If you're master modder Ben Heckendorn you disassemble the whole thing and turn it into a stylishly unstylish laptop.

Like all of Heckendorn's projects, his latest is captured in excruciating detail on his personal blog [http://benheck.com/09-11-2009/new-atari-800-laptop] including some clever hacking tricks that would make MacGyver proud.

For instance, when setting up the motherboard to run this gadget, Heckendorn found that he didn't have a device known as a "UV eraser." Without getting too technical, a UV eraser serves to quickly blank the data written to the motherboard's EPROM, but that's not important. What is important is that Heckendorn and his friend Chris Kraft jerry-rigged a makeshift eraser from a device used to clean fish tanks and it worked as well as the $90 gadget they lacked. If I ever need an atom bomb constructed from a nail file and three Lego men, I'm calling Ben Heck.

The real reason I wanted to highlight this project though is to say that Heckendorn's grasp of aesthetics has finally caught up to his technical ingenuity. I was always impressed when he'd make a laptop from an Xbox 360 [http://www.escapistmagazine.com/news/view/92901-Modder-Creates-New-Xbox-360-Laptop], but making those sorts of components look "cool" is almost too easy. The Xbox 360 already informs our modern notion of "stylish." It's like taping a picture of Megan Fox's head onto the hood of a Corvette; You won't win any difficulty points from the sexiness judges.

This project though looks stylish by virtue of it being so unstylish. By matching the clunky beige look of the original Atari with a faux retro keyboard and that special "now with 300 percent extra CFCs!" plastic that all those old machines were made of, and cramming the whole thing into a semi-sleek, compact housing, it's little wonder that Heckendorn describes this piece as "perhaps my coolest project ever."

As a personal aside, I'd like to remind everyone that my birthday is exactly one week from now. I'm not saying you absolutely must hire Mr. Heckendorn to build me a Sega Genesis laptop, but I will remind you that I didn't kill anyone this year. Not a single person.

That is a setup that would make eyes boggle if it was made back in the day the 800 originally came out in. This here is the testament to the human ingenuity factor. Awersomeness!
G

"but I will remind you that I didn't kill anyone this year. Not a single person."