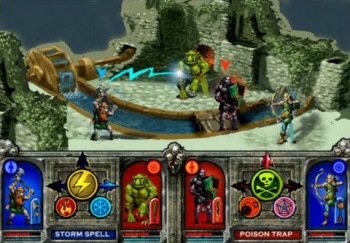 Irrational Games shows that even innovative projects sometimes get canceled.

With releases like BioShock, Freedom Force vs. the Third Reich, and SWAT 4, Irrational Games has definitely put out some good software since 2002. Dungeon Duel, on the other hand, doesn't have the same kind of cachet - largely due to the fact that Irrational shelved it during production. Today, Irrational released the game's documentation on its website, revealing a fantasy role-playing/real-time strategy/trading card game hybrid that might have popularized the console RTS.

According to the pitch document (which is available freely [http://downloads.2kgames.com/irrational/artwork/dungeonduel/irrationalgames_dungeonduel.pdf] online), Dungeon Duel "combines fast-paced RTS strategy with the addictiveness of card-game trading in a unique fantasy setting." Not only that, but it would have represented "a step away from the clunky PC conversions and slow turn-based games that have made up the majority of console strategy game market." The proposed mechanics themselves sound like a mix between Baldur's Gate and Magic: The Gathering. Players built up decks of cards, and then randomly drew them as they ventured into dungeons. These cards represented characters, items, and spells that would then explore dungeons and duke it out with monsters in real-time.

Chris Remo, an associate producer at Irrational, did not say exactly why the company canceled the game, remarking only that it "[got] more than a handful of assets developed before being ultimately consigned to Irrational's own dustbin of history." Whether Irrational is sharing the documentation with the internet out of a sense of history or a possible revival is anyone's guess.

Dungeon Duel sounds like it would have made a fine game, but Irrational has eased its absence by releasing some other quality games in the meantime. Although Dungeon Duel never saw the light of day, perhaps these documents will inspire someone to create his or her own genre-bender and change console RTS forever.

In before massive amounts of cynicism.

OT: Can't say I find the whole concept too interesting, but then I'm not into the whole card drawing Magic The Gathering thing.
X

Hey, somebody remembers the Freedom Force games! I loved both of them.

This isn't the only promising game they've scrapped. They desperately need a bigger work force over there, they're always scrapping great games for better ones.

xerzewatt said:
Hey, somebody remembers the Freedom Force games! I loved both of them.
Click to expand...