That really boils down to what you want.

BioShock has a really nice, dark environment and an interesting way of weaving in the story through architecture, recordings, NPCs ... It's really nice. I couldn't really get into it, though. :-/ If my computer was still working, though, I might play it.

I haven't played Battlefield 3, but if EA spying on your computer and what you do doesn't bother you in any way, then I would go with that. The multiplayer looks out of this world and the game looks fucking amazing. I was watching a video of it on YouTube and I didn't realize until the settings were changed that the game was on low settings. (o)_(o) I would have bought it, even though I could not have run it at full-blore, on day one if it had just not had Origin. When I heard about it, I felt like that guy from Planet of the Apes. X-(

What I would do, if both sound good to you, is buy BioShock now, wait a while until Battlefield 3 is cheaper, and then buy that one. 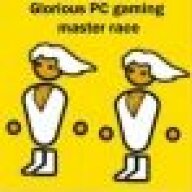 They aren't comparable. You shoot stuff in both, and besides they could not be more different. They're both good at what they do, and what they do is COMPLETELY DIFFERENT. So decide what you want in a game and post about that instead of making inaneforum posts asking people to compare incomparable, or I will turn off internet.
N

If it were me I'd be picking up Battlefield 3 in an instant. I loved the beta and I haven't even had a chance to play the retail release yet. But its all down to your personal preference. Seeing as you listed BF3 I'm assuming you like military shooters so if you want a hardcore shooting binge go BF, if you want a decent story and an exciting single player experience get Bioshock (grab Bioshock 2 as well seeing as both of those will still be cheaper than BF3)
Show hidden low quality content
You must log in or register to reply here.
Share:
Facebook Twitter Reddit Pinterest Tumblr WhatsApp Email Link
Top Bottom