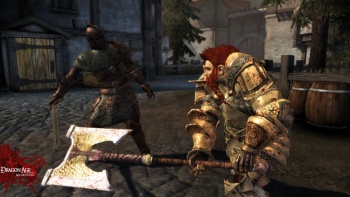 Dragon Age: Origins [http://www.amazon.com/Dragon-Age-Origins-Pc/dp/B001IK1BWC/ref=sr_1_1?ie=UTF8&s=videogames&qid=1278970552&sr=1-1] Online Producer Fernando Melo says BioWare was surprised by the mainstream success of the hit fantasy RPG and suggested that the studio might someday consider translating the game into the MMOG genre.

Released in November 2009, Dragon Age: Origins has received widespread critical acclaim, including sky-high review scores, numerous Game of the Year and RPG of the Year awards and perhaps most important of all, more than 3.2 million copies sold as of February 8, not a bad total for a game that billed itself as an old-school, party-based fantasy RPG.

"I think we've been really pleasantly surprised, obviously," Melo said in an interview with IncGamers [http://www.incgamers.com/News/21429/]. "I think we always believed in the game, we always wanted to make this kind of game, but having that kind of validation where it's not just the PC press or gaming press in particular, but mainstream press! We hear about Dragon Age now in TV, news, newspapers, and other media where I never would have expected to see Dragon Age, typically."

As a game created to follow in the footsteps of the decade-old RPG classic Baldur's Gate [http://www.bioware.com/games/baldurs_gate/], Dragon Age: Origins could count on a small but dedicated following of old-timer RPG fans, but Melo noted that the game's audience has grown far beyond that. "We start to see people that are blogging on business sites and they mention Dragon Age, and relationships, and all these other things that I keep seeing cropping up, and it's crazy! It's fantastic," he said.

As for the future, BioWare [http://www.bioware.com] plans DLC, expansions, sequels and, Melo suggested, maybe some thought about a move into the MMOG space. There's "enough material there and there's enough richness to the world that we could do it," he said. "Whether we want to or whether it's something that we would consider doing, time will tell."

Dragon Age: Awakening, the first expansion to Dragon Age: Origins, is set for release on March 16 in North America and March 18 in Europe.

Thats because its a good game.

Bioware make some of the best RPGS on the planet, they deserve the attention.

I'm actually surprised it's so popular. I'm a big RPG fan (and a Bioware fan), but I thought Dragon Age wasn't all that great. In my opinion, it's a pretty mediocre game (at least on console, I never got to try out the PC version).

When you're a major studio, name recognition goes a long way. I like 'em.

Although, they really suck at making DLC. I'm never getting Bioware DLC unless its free.

*goes back to playing Final Fantasy 13*

Once I'm finished this, I might get around to finishing ME2, and then...finally beating Dragon Age. For the first time.
H

I was surprised too. Never thought that something as generic as Dragon Age would do so well, especially when stuff like Oblivion, Fallout 3, and Mass Effect 2 is out and rocking.

Hurrah for Bioware!
As a rabid Bioware fanboy who wants to name his future daughter Imoen (Though the wife is stonewalling that one), this is excellent news. I've been holding off my full 2nd playthrough of Dragon age until Awakening comes out, and I'm pretty excited!
Great games deserve great praise.

I am surprised too! The game had shitty trailer-music.

Although it was a pretty dang good game.
D

I'm glad the game did so well, it will encourage developers to continue making solid single player games.
D

Its a game full of blood and violence and massive-huge swords, where the main enemies are (to all intents and purposes) zombies and the end boss is a fat-huge fire-breathing magic demon dragon. Oh and the writing, outside of the rather generic main campaign, is first-class.

Apart from being rather buggy on release (in my experience at least), there aren't many negatives.

I quite liked Dragon Age. It was quite good fun, a good length. I'm surprised that it sold so well, given that it's sort of niche.

Perhaps it had a lot to do with timing. There weren't a lot of RPG's to choose from at the time. Of course, being a Bioware game certainly helped. I personally didn't dig the game much, but I'm way too ADD these days to properly enjoy a game so thick with conversation.

Meh I'm waiting for goty edition with all the dlc. It isn't worth paying $120 for a complete game. There hasn't been a good RPG since Oblivion. And even that failed in the story department.

This is what happens when you make a great game and actually promote it to people other than the ones who you know are going to buy the game anyway. Kudos to Bioware on the sales numbers.. now, when's DA2 coming? Hehe

It had it's moments of awesomeness for me but after awhile i got a little bored of it.

Honestly, I'd be opposed to a DA MMO simply because of its typical fantasy setting. If they want a successful MMO that can compete with WoW and the like, I think their niche lies in either big franchise adaptations like ToR and/or settings not overtly common in the MMO genre (fantasy being the most common setting of course). Here's hoping we get an awesome Mass Effect MMO one day. 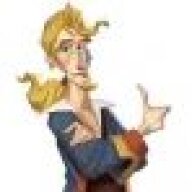 They are surprised with the success of a great single-player game and the first thing they consider is making it an MMO? DA goes KOTOR.

well lets talk about a Bioware mmo after the new Old Rebublic comes out.

also, there's a lot of dnd nerds out there, and DA:O fits that style really well. Not all video gamers are just into shooters. Im not surprised at all

Um... am I the only one that thought dragon age was a bit like a single player WOW. It was good but an MMOG would seem like a WOW ripoff, even if its not trying to be.
G

One of the things that I like (from what I have read, having not played it due to being too poor to afford it) is that the use of magic has a price and that price is your sanity. It's definately Dark fantasy, and that's something you don't see too much of these days in non-Japanese RPGs.

Sorry, I just had the mental image of someone demanding to pay for content because its free of charge.