I hope this kid becomes a ward of the state, because clearly his parents aren't responsible enough to have children. If it were up to me, that kind of parenting would get you permanently sterilized as well.

Poe's Law applies to everything. I prefer this wording:

shit parent uses scapegoat to avoid the hard reality that we need to start having a basic parenting test and start sterilizing mass portions of populace because they cant be trusted with a dog let alone a human child.

i dunno its enough to make a reasonable gamer go on a spree!

Redlin5 said:
Oh those darn video games, turning our young people into killing machines. Why can't it be like the 70's where people read commie propaganda (disguised as simple comic books) to become killing machines?

No more farming and mining simulators for you boy!
Click to expand...

psst that was the 1950's for the 70's you can blame disco and flairs for causing violence
Click to expand...

The Soviet Union was still subverting America in the 70's! They were using their liberal puppets in the media to attack the government over the war in Vietnam. If their economy hadn't collapsed less than twenty years later everyone would have become a Marxist slave!

A nine year old me would have totally and in fact did try to bring a gun to school and all I played back then was tag... I just.. you know... asked my dad first because I new it was his. He recommended we find something else... Gun would've been cool though.

OT: i saw this on Kotaku a few days ago, was wondering when the escapist would catch wind of it. I thought it was pretty ridiculous then, especially that this father had the gull to blame minecraft (which has been instituted as school programs) for his kid bringing a sledge hammer, a gun, six rounds, and a knife.

... and I was surprised the kid managed to bring it all. I know it was a hand sledge hammer but still that had ot be heavy and take up a ton of space in his backpack.
D

This kid's got some serious self control. I once lost a damn day to minecraft.

So yeah...not much to say here except that is one dumbass dad.

Also, a small fucking sledgehammer? Maybe include the damn school in that statement. 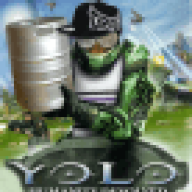 Oh God! I have been predicting this for years. They have finally run out of violent games/franchises to blame and have blamed something that has no violent qualities (the best MineCraft does is teach you self-defense and how to stop suicide bombers).
Even the name 'MineCraft' should tell you this.

The dad is complaining about his son bringing the weapons to school and blaming video games, but answer me this. Did the dad have those weapons secured? I highly doubt it. Minecraft isn't even "a zombie slaying game" as he put it, while yeah it has monsters in it that's not really the purpose, and vanilla minecraft doesn't even have guns!!

This guy has his head firmly lodged in his butt, the games aren't at fault, his poor parenting is.


miketehmage said:
Anyway what baffles me more than anything else is "Mini sledgehammer."

What exactly is that? A hammer? Because if it's actually a smell sledge hammer I'm impressed a 9 year old managed to carry it all the way to school in his backpack along with a gun and a knife.
Click to expand...

They probably mean a mallet that doesn't have a rubber head, i've got one.

He said his son brought the weapons to school to emulate "the zombie-slaying game" Minecraft, which he played "every day, for about an hour..."
Click to expand...

Seriously? The kid only plays the game for a fucking HOUR a day and THAT'S the cause for this?! That barely even amounts to a hobby.

But no worries, keep on blaming those evil videogames, surely it can't be poor gun safety or anything like that right?
Click to expand...

And really, a kid messed up with minecraft is far more likely to dig up his backyard with the tools from the garage so he can build some kind of massive house. I don't see how it has anything to do with the gun.

MatsVS said:
Boy brings guns to school, father a moron who should be arrested for keeping firearms and ammunition around the house where a 9 year old could get to them.
Click to expand...

Actually he did keep it without the firing pin so he had taken some measures to avoid it being used to actually kill someone by accident or not so it's not as irresponsible as a great number of cases that have been reported earlier. Still... I can't say it's responsible...

OT: Honestly in this case I'm not sure what might be the main factor. While the fact that a 9 year old could get his hands on a gun is frightening it wasn't left in a state where it could be used and his parents monitored his gaming since he was limited to 1 hour a day it seems. My guess here is that the kid is having some problems in school, either bullying or underachieving and might be dealing with some self esteem issues. This kid should be checked out by a psychiatrist rather than sentenced to home confinement. That's kinda like having the bomb squad increase the time on a bomb rather than actually disarming it.
D

Ken Sapp said:
Actually a sledgehammer can be quite concealable. I, for instance, have a 2 lb. sledgehammer with a 1 ft handle. I could easily hide that in any backpack I have ever owned. Whether or not I would want to carry it around all day is another matter.
Click to expand...

That's just a hammer imo, a sledgehammer is something most people would need two hand to wield effectively imo.

But anyways, gun control is/should be the issue here. How children in America need to get a hold of a gun before people start taking the precautions needed.
Maybe they need to get rid of guns (never going to happen) or make an example of one of the negligent parents/guardians (jail time?) and make sure it gets a lot of press coverage state/nation wide.
Or maybe there is a better solution but off the top of my head I can't think of one.

And I just realised they can't blame realistic graphics this time.

I was hoping someone would bring that up.

Oh god, do you all know what this means? No game is safe from the anti-gaming media!!!

kid brings bombs to school and somehow it will be Doodle Jump's fault.

This is news because Minecraft is very popular with kids.

JokerboyJordan said:
Seriously? The kid only plays the game for a fucking HOUR a day and THAT'S the cause for this?! That barely even amounts to a hobby.
Click to expand...

Probably a vast understatement, to try and make him sound like a better parent. He realised he fucked up allowing a 9yo access to his personal weapon, so obviously doesn't want to admit to the press that he lets the kid stay up until 1 playing minecraft every night... I also doubt he only plays minecraft. What are the odds on him also having Left for Dead, or a game which actually has guns, sledgehammers and knives?

Seriously though... A kid taking weapons to school because he thinks he is immitating a game is no different to one of my cousins who went through a phase of making bows and arrows out of string and wood and firing them at people because he read robin hood! (And also a lot of other books which involved people with bows! Seems there were a lot!) What are they going to do? Ban kids from reading too?

OH...MY...GOD...an entire HOUR of Minecraft a day? Truly his son was the most hardcore of gamers! Playing COD and GTA is one thing but only the most violent and depraved games ever made...Minecraft. Next thing you'll tell me is he played Peggle too!

But seriously fuck that irresponsible, dumbass dad. It's times like these I really think that you need a license to raise a kid because fuckwits like him are responsible for the well being of a child. How these clearly negligent parents get away with this crap is disgusting.

Reminds me of the time I brought my dad's AK-47 and a clip full of hollow point bullets coated in gasoline to school because I used them to shoot dragons in Zelda. They should make child friendly games. Like a game about building structures out of blocks or something.
Show hidden low quality content
You must log in or register to reply here.
Share:
Facebook Twitter Reddit Pinterest Tumblr WhatsApp Email Link
Top Bottom