This one's seen some hard use, but it's not the one you saw in A New Hope.

Let's just get one thing out of the way right now: Han shot first.

If you want to prove that, buying Solo's iconic blaster - due to come up for auction December 21st - won't help. Though this weapon has seen plenty of action in its day, it isn't the one seen in Star Wars: A New Hope, as that blaster is thought to have been destroyed during filming. This is the one used in The Empire Strikes Back and Return of the Jedi, but if you want it, you'd better have deep pockets, as its estimated price is $200,000 - $300,000.

It's not just Solo's blaster, claims the auctioneer [http://www.invaluable.com/auction-lot/harrison-ford-han-solo-dl-44-blaster-from-star-379-c-44e307f3bc], as it was likely also used by Luke in Empire Strikes Back. This resin replica was modeled faithfully after the original weapon, and even has the same serial number. It's in its original filming condition, hence the wear and tear.

Star Wars' German Mauser C96 [http://starwars.wikia.com/wiki/DL-44_heavy_blaster_pistol] pistol, first developed way back in 1896. The Star Wars version lacks the original's detachable stock, and has a rifle scope, but otherwise it's pretty much the same as the iconic Broomhandle.

Fancy a look at what else the auction has to offer? Perhaps you want to know how much Frodo's Sting or an original Metropolis poster goes for these days? Take a look at the auction catalogue [https://www.profilesinhistory.com/wp-content/uploads/2013/12/62S-final.pdf].

Or how about Steve McQueen's Gulf racing suit from Le Mans?

Or some James Bond gear?

LOTS of amazing stuff in that auction.

There is way more to this auction than just the blaster, as even the diary from The Last Crusade is there - This will more than likely be one of the most monumental auctions in history just looking at the list.

Karloff said:
Let's just get one thing out of the way right now: Han shot first.
Click to expand...

How can he have shot "first" if he's the only one who shoots?

Dr.Awkward said:
There is way more to this auction than just the blaster, as even the diary from The Last Crusade is there - This will more than likely be one of the most monumental auctions in history just looking at the list.
Click to expand...

Seriously... Deckard's pistole from Blade Runner (stunt prop), Mulder and Scully's Badges, the journal you mentioned, young Indiana's whip from Last Crusade, the Don's assassination coat from The Godfather, an insane amount of easily recognizable screen used Star Trek props from the series and movies, the animatronic opening Egg from Aliens, hell they even have Marty's Hoverboard from Back to the Future II and III. I don't think we'll see an auction with more iconic items than this one in our lifetime.

Edit: Man... I keep finding more crazy stuff as I go through there. Forrest Gump's AR from the movie when he was in Vietnam, along with Lt. Dan's helmet. Also, John McClane's NYPD Badge from Die Hard with a Vengeance, and his distressed outfit from the movie, and "Wilson" from Castaway, and A FULL SCALE ARACHNID from Starship Troopers, Neo's longcoat from the Matrix, Alice's full outfit from Resident Evil Apocalypse, with weapons... WOW.
K

People are still on about the who shot first thing? Damn son...is there any conclusive evidence as to who shot first, or are the directors being ambiguous about it?

I wouldn't pay 300 grand for an old prop,cool though it may be.

Is it odd that my first thought was "perhaps Adam Savage will be a bidder on this, perhaps!"

"The original was thought to have been destroyed during filming." What, did somebody step on it and then hide the evidence or something?
S

Oh man...I wish I had deep pockets. I would totally buy this!
J

Karloff said:
Let's just get one thing out of the way right now: Han shot first.
Click to expand...

How can he have shot "first" if he's the only one who shoots?
Click to expand...

Didn't you just answer your own question? If you're the only one participating, you're most definitely first.

Honestly, I think this blaster is the more alluring of the two. The original may have shot at Greedo, but this one shot at Darth Vader.

the iconic things they have in that catalogue.. heck even Marilyn Monroe's most famous dress is up for auction. ha robin williams costume from mork and mindy 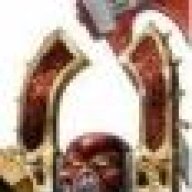 For 300k, you could just buy your own C-96 and mod it, plus you'd have change left over. I mean movie props are cool and all, but that's excessive.

I'd buy it at that price if it actually fired.

Norix596 said:
"The original was thought to have been destroyed during filming." What, did somebody step on it and then hide the evidence or something?
Click to expand...

Goergie got a little hungry.

OT: This is really neat. Only if it wasn't so darned expensive.

Oh, to be rich right now... so rich I could just buy every damn thing in that auction. Then I'd have to have my own Raiders of the Lost Ark (I refuse to accept there was a 4th Indy movie) style warehouse of secret treasures in crates. Just for the effect.

No thanks , for that price it should at least be able to kill the things I point it at