Can't seem to get over a girl

Yes, its a relationship (Or post-releationship in this case) advice thread. Sorry

So basically I just finished my first year of college and for about 5.75 months I had a girlfriend. Great girl, blah blah blah. However as with most freshman relationships it crashed and burned in spectacular fashion.

At any rate its been about a month since we broke up and I'm having trouble getting over her even though she lives in Jersey while I live in Cconnecticut. Especially since she's apparently "back on the market" and looking to date other people again.

In short, does anyone have any advice on getting over this girl? I'd really like to be over her by next semester so that we don't fight again and I can move on to newer pastures.

TL;DRI can't get over my ex, how can I do that?

Thanks in advance for any answers

Captcha: "Come what may"
Well...that oddly fits.
B

The only thing that works is to give it time.

Try your best to mentally "move on" from this girl - don't keep tabs on her, don't fantasise about winning her back - just focus on yourself. Immerse yourself in your friends, hobbies and your studies and you'll know when you're ready to get back in the game.
B

Essentially, do exactly what Batou667 outlined -- except delete her from Facebook, delete her from your phone, etc. Legitimately move on, because going into a new relationship with emotional baggage from your previous one will just doom it to failure. 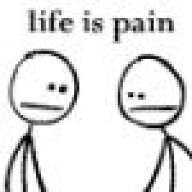 As others have said, delete her from your life.

Also, you didn't make it to 6 months with this girl. It was never serious, I know that might seem a harsh thing to say, but it's true. So man up and get over it soon or you'll end up 35 and living alone in your parents basement before you know it.

GFTOG - Go Fuck Ten Other Girls.
By the time you're through with that you will have moved long past her.
Also, delete her from Facebook, your phone and whatever service you employ that can contact her.
Also, six months? Bro that is nothing.

Focus on yourself a bit, got any hobbies you've been skimping on or any new ones you want to start with? I find putting time into a worthwhile hobby that has you learning cool skills really takes your mind off things and even lets you emerge a bit more confident when you are successful in it. My guitar for instance has been my main savior from crap like this, odd how music soothes the pain in the soul.

You should also cut ALL contact (facebook, mobile, twitter etc.) from her and remove anything you have with you that can possibly remind you of her, also I highly recommend you ask a bunch of your friends to go get shitfaced with you at a bar and definitely try wingman you into the arms of another girl, if one night stands aren't your thing then keep it at some drunken tonsil hockey then, regardless a good night like that with friends really helps a ton and sets you up nicely on the road to recovery.
Show hidden low quality content
You must log in or register to reply here.
Share:
Facebook Twitter Reddit Pinterest Tumblr WhatsApp Email Link
Top Bottom