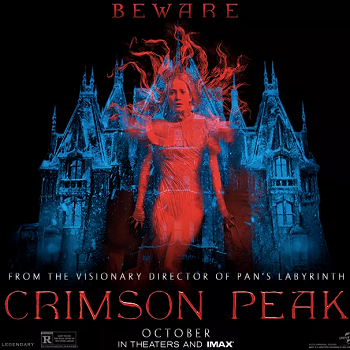 Despite mostly positive reviews [http://www.rottentomatoes.com/m/crimson_peak/], a strong cast, and a crticially lauded director at the helm, Guillermo Del Toro's Crimson Peak flopped hard at the box office over the weekend, recouping just $13 million of it $55 million budget. Some critics have blamed the film's failure on its derivative marketing campaign, which painted Crimson Peak as another straight-up haunted house flick instead of the "gothic romance" tale that it really was, while others simply think that "gothic romance" tales just don't appeal to the same mass audiences that continue to gulp up Transformers movies like they are cinematic crack.

In any case, Crimson Peak flopped, hard. Not " [http://www.boxofficemojo.com/movies/?id=pan.htm] by at least one critic. But when a movie fails domestically, international markets usually make up the difference, right?

In Del Toro's case, the answer is an unequivocal "yes," as the majority of his films [http://www.boxofficemojo.com/people/chart/?view=Director&id=guillermodeltoro.htm] have fared much better overseas than here in the states -- with China usually leading the way. The only problem is, certain Chinese censorship laws may not only lead to Crimson Peak underperforming there as well, but being passed on entirely.

According to The Hollywood Reporter [http://www.hollywoodreporter.com/news/chinas-no-ghost-rule-could-833473], the China Film Bureau's official censorship guidelines prohibit films that "promote cults or superstition," and as such, Crimson Peak has not yet secured a release date.

"(The ban) stems from the Communist Party's secular ideology, which censors have used the provision as rationale for banning or demanding cuts to films that present ghosts or supernatural beings in semi-realistic fashion. Exceptions are made for stories based on Chinese mythology," writes the Reporter.

Luckily for Del Toro, the deceptive ways in which movies are marketed here in the USA might very well save him in China.

Chinese filmmakers have been known to employ inventive, if inadvertently amusing, plot devices to work around the no-ghost policy - deus ex machina as censorship dodge. Consider local horror hit The House That Never Dies, which grossed $65 million last year. Inspired by a well-known, purportedly haunted, house in the Chinese capital, the film follows a woman tormented by ghosts in her historic Beijing mansion - so far, unprecedented for modern Chinese cinemas. But then a final act reveals that all of the foregoing ghostly encounters have simply been hallucinations, because the heroine was secretly dosed with LSD. Other Chinese genre directors have used curtain-closing revelations of mental illnesses, bad dreams or hypnosis to skirt the rules.

Basically, if Del Toro can slap a Shyamalan twist onto the end of Crimson Peak in *post* post-production, he might just make his (and his investor's) money back. Which, having seen Crimson Peak, shouldn't be that hard to pull off: cut out a few key expositive moments here and there, maybe eliminate the third act entirely, throw in some narration over the credits about how "it was all just a dream," and boom!, you've got yourself an international smash hit.

So what if Del Toro has to sacrifice his artistic integrity in the process? They don't call it the film business for nothing!! (*kicks up feet on desk*) (*lights cigar with 100 dollar bill*)

I just couldn't figure out what the heck this movie was supposed to be from the marketing. It's commercial played itself out as a horror movie but the art and tone of what I saw made it seem like it was something closer to beetle juice or Sweeny Todd.

Kinda glad I'm not the only one who was wondering what the hell was this movie supposed to be based on the commercials.

The marketing for this film sucked. I've only seen one commercial, and it was after the film released, while I was in the theater for another movie. We're talking about Nintendo levels of bad marketing.

Also, the trailers gave me nothing to go on, other then the fact that it was a Del Toro flick. If I hadn't seen that, then I wouldn't have even cared. And most people probably don't recognize that name.

I really only saw one trailer repeated over and over on youtube.
I will say, it interested me and at least looked more visually developed than a lot of horror movies, but I couldn't get even a basic grasp of the premise beyond "spooky haunted house and white dress."
I meant to go see it, but the overall vagueness and my general dislike for modern stereotypical horror movies made it hard to find the motivation. Hopefully it does well overseas - I want to see more from Del Toro, even if I don't see this.

...films that present ghosts or supernatural beings in semi-realistic fashion
Click to expand...

How can you tell that a ghost is even "semi-realistic"? There isn't exactly an objective standard of a ghost to compare it to.
Click to expand...

It's the manner of presentation. If you show a ghost in a movie, you're saying that ghosts are real in that movie. That's why they can wink, wink, nudge, nudge it all away with stuff like the LSD dosing or 'it was all a dream' in the end. 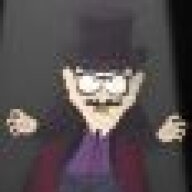 Really guys? So if the trailer doesn't give the game away, your not interested? If it doesn't fit into one of a few neatly slotted holes properly, you don't bother? I shudder to think of how many critically acclaimed movies from previous decades would have flopped if they came out now if this is really the standard that it takes people to go see a movie these days. I wonder how many people went and saw Fight Club expecting a documentary on underground soap production.

Personally I enjoyed the movie a great deal, despite not knowing everything about the movie before I walked into the theatre.

Nailzzz said:
Really guys? So if the trailer doesn't give the game away, your not interested? If it doesn't fit into one of a few neatly slotted holes properly, you don't bother? I shudder to think of how many critically acclaimed movies from previous decades would have flopped if they came out now if this is really the standard that it takes people to go see a movie these days. I wonder how many people went and saw Fight Club expecting a documentary on underground soap production.

Personally I enjoyed the movie a great deal, despite not knowing everything about the movie before I walked into the theatre.
Click to expand...

It's about tempering expectations. Not everyone likes every genre of film, so being tricked into going to a horror film only to find out that it's a romance movie that happens to involve ghosts, it's going to put some people off a bit when they walked into the theater looking forward to a movie that would make them crap their pants; and especially if it's a person who isn't into romance as the central focus of a story.

It has nothing to do with the trailers not spelling-out the whole movie. It's that the trailers were specifically deceptive about what kind of movie it is in the first place. Not only did selling it as a horror film turn a lot of people off when they went to see it, but it probably also caused a lot of people who would have gone to see it to give it a pass because they aren't big on horror flicks.
Show hidden low quality content
You must log in or register to reply here.
Share:
Facebook Twitter Reddit Pinterest Tumblr WhatsApp Email Link
Top Bottom