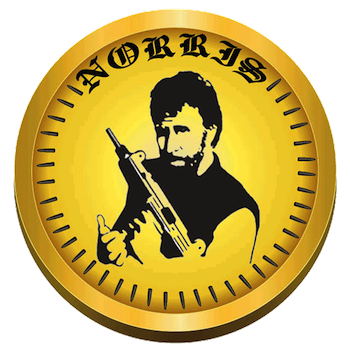 Sad news for those hoping to corner the 80's action movie cryptocurrency market.

If you ever decide to invent/invest in a cryptocurrency, it might be best to avoid those that use the likeness of celebrities. First, Kanye West shut down Coinye West, even though the creators claimed they intended to refer to a [a href=http://www.escapistmagazine.com/news/view/131223-Kanye-West-Gets-Counter-Cease-and-Desist-from-Coinye-Creators]"half-man-half-fish hybrid who is wearing sunglasses"[/a]. Now, the Chuck Norris-endorsed "Norris Coin" has received the legal ban hammer because it wasn't actually endorsed by the action star.

"This is a completely unauthorized use of Mr. Norris' name and likeness," Norris' publicist, Jeff Duclos, [a href=http://arstechnica.com/tech-policy/2014/01/chuck-norris-can-shut-down-your-wannabe-bitcoin-with-just-his-fingers/]told Ars Technica[/a]. "There is no affiliation. His legal representatives have now intervened and this operation has been shut down."

The coin was set to launch on January 14. While the site has since been taken down, the Internet Wayback Machine provides a [a href=https://web.archive.org/web/20140108180836/http://norriscoin.org/]helpful archive[/a]. There, it advertises that "Chuck Norris doesn't give a fuck about the 10 KnC ASIC miners you stockpile in your parent's basement. He's gonna roundhouse kick you in the face the next time you go buy your XXL Grilled Stuft Burritos from Taco Bell." It sounds like it would have been a good choice for those who prefer their currency masculine and aggressive. While it might have died an early (and totally expected) death, all is not lost for altcoins. After all, [a href=http://www.escapistmagazine.com/news/view/130890-Dogecoin-Community-Raises-Money-For-Victims-Of-Christmas-Hack]Dogecoin[/a]'s still alive.

Now I just want to know how many other celebrity coins there are. Are we missing WalkenCoin? How about Coin-3P0? Carmen Electcoin?

I mean, how many times can this possibly happen before this stops?

Next up on the news: Dogecoin is shut down after receiving a cease and desist threat from the Doge's lawyers.
D

You know, if they're looking for a pop culture icon to put on a cryptocurrency that shouldn't run into as much legal trouble as the other two that tried the same... How about BelushiBucks?

Now I want to see what Christopher Walken would look like on a coin.

Why do these gimmick crypto-coins keep getting made? Doesn't it diminish the value of the other coins? And why can't they be named sensibly?

Well, in this case, the celebrity had better win because we actually LIKE Chuck Norris.

Good. Every time I hear/read the name Chuck Norris I want to punch someone. Preferably the person who uttered it.
K

kailus13 said:
Why do these gimmick crypto-coins keep getting made? Doesn't it diminish the value of the other coins? And why can't they be named sensibly?
Click to expand...

1) People want in on the market that bitcoin found, and think they can make money by setting up their own and selling it.
2) No. Basically it's like multiple internet countries establishing their own currency, as opposed to one internet country building more mints to flood the market with more money (which would devalue it).
3) Name recognition means people stumble upon it without meaning to. Search for Chuck Norris, and surprise- there's (presumably) a link to NorrisCoin on the first page of results.

This is getting absolutely fucking ridiculous.

Seriously, it's not funny anymore.

Now everyone and their fucking grandmother will have their own person-or-meme-based-cryptocurrency.

For the lulz, I wager.

I'm sorry but I just can't wrap my head around all this Bitcoin stuff. It's internet money that people slap pictures of whatever on and spend it maybe? Monopoly money is more legit than this!
T

Now I want to see what Christopher Walken would look like on a coin.

Why do these gimmick crypto-coins keep getting made? Doesn't it diminish the value of the other coins? And why can't they be named sensibly?
Click to expand...

I honestly do not get the celebrity angle, though I must admit that it surprises me we haven't seen celebrities intentionally trying to create their own currencies, as it seems like something some of them would do.

That said, the basic idea of this kind of money is that it's backed by computing power, as opposed to gold, or the agreed on output of your country's economy, or whatever.

The basic idea seems to be that you run a computer and link it's power into a network controlled by the consortium minting the coin. This group of people then sells out the computing power, a sort of super botnet, to other sources for various purposes. Your "bitcoin" is basically your payoff for the amount of computing power you donated to the network.

It should be noted that contrary to rumors it's not backed by "nothing at all" and the idea is that the guys running the network make enough money from their clients to cover the cost of paying out the "bitcoins" while making a tidy profit themselves.

The thing is though that it requires very specific hardware to get involved in this, which represents an up front investment on the part of the guys mining the bitcoins, which of course means substantial profits for the hardware manufacturers who are producing specialized machines that really can't be used for much else. What's more as more people get involved in the networks the greater the contribution that needs to be made by each individual to successfully mint a coin, requiring more machines, and a larger investment, and likely leading to a crash. Bitcoins are a sort of gambling game, to see how much you can get out of it and then presumably sell your hardware to someone just starting, before the entire thing collapses in on itself. The guys at the top of the scheme of course will have whatever profits they made short of the bitcoin payoffs up until that point.

Proponents of the currency, and those selling it, claim that there won't be any crash, and basically anyone who wants to invest in a machine or two, can pretty much 'print money' out of their basement as long as there is a demand for high end computer processing.

Multiple currencies basically come from multiple people building up networks that can have their services sold. The idea that say Bitcoin might rent it's network power to one corporation, and Dogecoin might say rent to another. They aren't going to DIRECTLY impact each other, but more competition does mean that the prices for the services are going to go down, which in turn means it will be harder to make something out of it. But hypothetically enough enough potential clients any number of digital currencies could be supported.

At least that's my understanding of the entire thing, which should be fairly close. I'm guessing things like "Norris Coin" were never intended to really succeed and were some people trying to get a few laughs and see if they could bait an actual response. That said, it does surprise me that some of the more egotistical celebrities, pro-athletes, rappers, certain actors, etc... aren't all chomping at the bit to get money printed with their face on it, even if it doesn't last. Of course then again a lot of those people also probably maintain financial advisers that tell them to stay far, far, away from digital currencies.

As one final point, the entire thing had one big chance of succeeding more or less as a permanent institution, and that was when the Bitcoin was operating as an untraceable international currency that could be used to buy contraband. "The Silk Road" site which was selling all kinds of illegal stuff for bit coins was however hit hard, and makes it unlikely similar businesses will flourish, and now enough nations have the possibility on their radar that it will probably never become a black market currency, maintained artificially by third party interests just for such trades. Indeed early on that is what a lot of people people thought Bitcoin was specifically because of "The Silk Road" and how it was pretty much the only place of note dealing in it.

Well at least Coinye didn't lie about being affiliated with Kanye West.

JoJo said:
Next up on the news: Dogecoin is shut down after receiving a cease and desist threat from the Doge's lawyers.
Click to expand...

I know your joking, but I doubt it would ever happen. The average person who's video or picture that ended up up online as a huge meme usually just gets a chuckle and goes on with life with out caring. That Japanese school teacher who's dog is now all over the net and on a digital coin probably wouldn't sue even if the people making it were in Japan. Famous people with money and lawyers can and love to crush anything with a remote likeness to them. Even if it's not making money. Remember that picture of Beyonce that was turned into a meme that her agent wanted taken off the net? It was just a bad shot at the right time that looked hilarious.

Just wait until Hollywood starts making more movies based off of internet memes and finally a person who has legit proof they started a meme tries to get a small amount for inspiring the whole thing. They might be in desperate need of cash to get an operation or get out of debt and the self entitled Hollywood bigshots would get their case thrown out before it ever got to court while counting all the money they made on a low budget film. Where as if it was a famous person who was in the meme, They could probably stop it or get some royalties even if their likeness was changed for the film.

Are these people just plain dumb? I mean, I still don't know what this things are (still can't understand the concept) but putting someone on it that's pretty much known WORLDWIDE just calls for a lawyer-boot on their asses.

At least Coinye had a joke to go with it, in the form of the pun. "Norris Coin" doesn't have anything.

We need to make a bitcoin called Jim Sterling...

For those who don't get it, the British currency is actually called the "Pound Sterling", so it's a joke you see... because it works with his name....