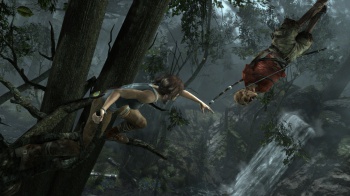 Crystal Dynamics is going all-in on the PC version of Tomb Raider, with all kinds of acronyms for things that none of us really understand.

Detail tessellation! SSAO! Single sideband modulation! Bokeh depth of field with near-blur! One of those things has nothing to do with PC graphics, but you could probably slip it into Crystal Dynamics' press release for the PC edition of Tomb Raider (kind of like I did here) and nobody would bat an eye. The eye-candy extravaganza is powered by "very high resolution textures," high quality shadows, tessellation algorithms "to smooth out geometry," improved cloth, wetness effects, post-filter effects, SSAO and adjustable LOD, plus all the stuff I mentioned above - except that one thing. For those who have it, Tomb Raider will also support AMD's HD3D and Eyefinity tech.

It'll take some fairly heavy iron to run the game in all its glory, but Crystal Dynamics says it's worked in a lot of scalability options to keep the game viable even on low-end rigs. These are the details from both sides of that coin:

But can it run on Linux? No? NO SALE FROM ME! Maybe.

It's good that they're supporting older rigs as well. We got money to save.
V

Isn't it a bit odd they release recommended specs for quite old hardware - Fairly high end hardware at that?

Seems to me it would be easier for consumers to get an idea if they released the equivalent current gen specs?


I'm waiting until the reviews are out for this one though.

Making sure it's a good port.

Interesting. The game can run on hardware as old as current gen consoles. This is what every port should be able to do.

I will be happy the day we finally abandon DirectX 9.

I'm tempted to buy this just to support devs that are actually supporting PC's capability, even though i've hated any laura croft game i've ever played. 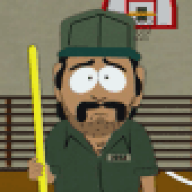 GTX 480? Pfft, call me when you get serious, Crystal Dynamics.

I've been tempted by this ever since it was announced, but questions still abound as to whether I should pre-purchase and pre-install, wait for some reviews and even whether or not I'd enjoy this more on PC or 360.

Wow, a new game that I can play at near max settings. Did I go back in time or did I finally get to building a new computer?

Andy Chalk said:
It'll take some fairly heavy iron to run the game in all its glory
Click to expand...

>Implying the 480 is "Heavy Iron" in the PC gaming world.

Really, this isn't that 'heavy iron'. A rig from 2010 can max it out fairly easily. Still, if it actually has what you put up in the article as its graphics options then that'll be nice, provided its done well. SSAO, Tesselation and DoF are quite nice, and if the textures actually are High resolution that'll be a godsend. I'll wait for post-release 1440p screenies and reviews first though.

that is not heavy iron than is my now retired rig in fact the retired rig is pretty exactly bang on the recommended settings
my current rig is 2-4 times that in every category
3 times the GRAM twice the cores twice the RAM probably a much higher clock speed on all of it and not even overclocked yet
Show hidden low quality content
You must log in or register to reply here.
Share:
Facebook Twitter Reddit Pinterest Tumblr WhatsApp Email Link
Top Bottom