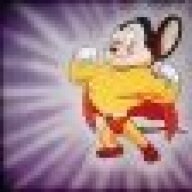 Greetings, cyberspace dwellers! I am Deathspank....Vanquisher of Evil, Hero to the Downtrodden, yada yada. In my previous adventure, I slayed the nefarious Lord Von Prong as my taskmaster Sandy instructed, like a good little vanquisher. Fortunately, Sandy immediately informed me that more adventure awaited me, as more foes of justice emerged, possessing the power of mystical underwear, just like yours truly. I'll will have to duel with the likes of an sadistic nun, a cook with an weird appetite, and even the fat, red, North Pole Nicholas himself, who is hardly a saint these days. Even more fortunate, you sufferers of painful appendages could guide me throughout this sequel, for a nominal fee! The question that remains, however, is whether or not my new game is worth a gnome's earlobe...

Pros: Astonishingly handsome main character, plenty of humorous dialogue, varied and vibrant backdrops
Cons: Endless fetch questing. You'll feel like a puppy retrieving every fuzzy tennis ball ever thrown
WTF: Why is my money so useless? At least let me purchase a harem of properly aged girls or something

The game starts off with me being locked away in prison, peeling away at potatoes, jamming with harmonicas, and doing other prisonly things. Why? Should've bought the first game cheapwad, but a narrator sums it up nicely. My addiction for real justice eventually takes over, and the player is introduced to the first battles of the game. Here, you'll learn that the D-pad and face buttons on your controller are slots containing whichever item you respectively insert into them. All this talk about insertion, slots, and prison makes me a wee bit nervous, though. The left stick controls my movements, shoulder buttons are used for whipping out my shield or opening a map of the downtrodden land, and the Select button brings up my quest log. After slaying down many foes, you will be introduced to a few of the many NPCs littered across this great nation. These NPCs provide humorous banter and rewards from quests for you to accomplish, since that guy that had something to do with creating Monkey Island wants it that way. As you slay and dismay the opposition, you'll get stronger by something us heroes like to call "leveling up". It's not dirty, I swear.

Leveling up involves the process of completing quests and vanquishing villains to gain XP. Weapons, armor, items, and the enemies you face will all have levels, so its really reeeeeeeeally important to keep up with the Joneses. The Joneses are never downtrodden, somehow. Gaining a new level will offer you progress cards that makes me even more awesome. Do you want me to have the ability to use armor 1 level higher than mine? Do you want me to be faster, stronger, even greedier? You can only pick one card at a time, so choose wisely, since me and "wise" don't have much of a history together. Weapons and armor will be dropped by freshly killed enemies. You can set up your inventory to automatically adorn me in my finest, strongest garbs. The weapons and items that you find can be inserted into any one of the 8 quick select slots, and used by command of pressing the corresponding button. Reap the benefits of obedience and non-evilness!

The inventory system contains all of the loot and notes that I pickup along the way. Eventually, your inventory will become too puny to hold all the crap I run across, and that's not including what I find in the outhouses. When you have to make room for new possessions, you can grind old weapons, items, and armor for cold hard gold! When my (shout it with me) JUSTICE METER is full, I can utilize a special attack from any Justice Weapon that's in a quick slot. Collecting mystical runes allows me to use Justice Weapons in combination with an specificed elemental weapon for a SUPER SPECIAL JUSTICE ATTACK that can easily take down any fools that I pity.

The map shows you where you are, what lands you haven't explored, and the outhouses you can teleport to. Yes, teleporting outhouses is the main advantage of wearing the Thong of Justice. Whenever you get me killed, I simply respawn to the closest outhouse near my previous demise. Now I know what you're thinking: "Deathspank" you'll say "doesn't simply respawning at the nearest outhouse make your game much, much easier"? To that I would say "damn skippy". The only negative of dying is losing a percentage of the gold you got on you at that time, and being the laughingstock of the shire. Hell, YOU might laugh at the non-existence of a real setback. That whole "losing gold" thing? Sounds bad at first, but then you realize that you will NEVER need it, since items are always dropped from enemies.

What sets this game apart from most dungeon grinders is the humor. There's dialogue for everything in this game. Converse with the NPCs, interact with certain items, there's even a brief description for all the items that you gather in your inventory. Will you laugh? I admit, I chortled a couple of times while reading the script for this game. One thing that's offputting, however, is that you will most likely read the joke a few seconds before it's even spoken out by my titillating voiceover, because the dialogue pops up before anything is said. It takes away the initial joy of voice actors delivering well-written lines. I will also admit that the jokes were hit-or-miss for my humor palette.

The bad? The formula is fetch, vanquish, fetch, vanquish, fetch. I know that all games are repetitve in their own ways, but what matters is that it has to be so fun that repeating the same process over and over doesn't become tedious. This is where Thongs of Virtue falls a bit short. The game is easy enough to ignore elemental stats, just chop and shoot away at those justice victims til they are kapoot. A lot of the quests involves me killing the same baddies for different reasons. Collecting enemie poop may have been funny the first time, but having to do it 15 more times just to figure out which outhouse to travel to to drop it off to the person that sent me on that quest eons ago simply gets old for me after the umpteenth time. And "umpteen" isn't even a real number!

All in all, Thongs of Virtue isn't a bad game. The humor is good, the environments are varied, and the controls are fluid. My main gripe is how tedious this game can become if you weren't totally in love with the first game. But if you want an interesting venture of donkey poop, evil monks, huge-nosed damsels, and fighting Santa Claus, then this game will be worth your 15 hard-earned dollars. Now if you'll excuse me, my thong is chafing a bit on this computer chair.