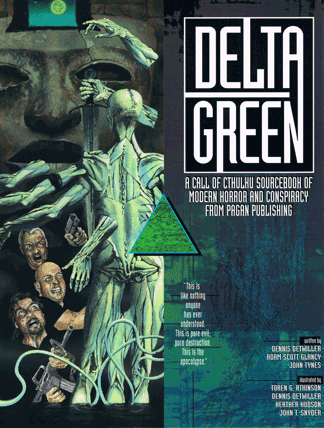 Deception is a right. Truth is a privilege. Innocence is a luxury.

Delta Green is one of the most beloved and highly-regarded tabletop roleplaying games of all time - and it's available right now through April 9 at The Bundle of Holding. Originally a Call of Cthulhu spinoff, Delta Green is a game about intelligence agents operating under the radar to fight Lovecraftian abominations in the modern day. It was the winner of numerous awards - including best RPGs - in its release year of 1997, and has, along with one of its supplements, Countdown held a vice-grip on the top two spots of fan RPG-rating website RPG.net [http://rpg.net].

Even if you're not interested in playing the game - and you should be - the bundle's higher tier price includes a copious quantity of spy-focused horror fiction. That aside, Countdown is one of the most fascinating secret histories you'll ever read, rife with alien conspiracies, parasitic worms, and shadows out of time.

Delta Green tells the story of CIA spies, FBI investigators, NSA intelligence analysts, or even CDC scientists who have gotten in too deep - too deep into the supernatural and alien horrors that permeate reality, that is! They're part of Delta Green the American government's secret program that investigates and handles the supernatural creatures of the Lovecraftian Call of Cthulhu mythos. The Bundle of Holding sells limited-time collections of DRM-free ebooks, nonfiction, and tabletop roleplaying game rulebooks. Each bundle sold goes to support both the authors, the bundle organization, and two charities chosen by the contributors.

The Delta Green Bundle is available now at the Bundle of Holding [http://bundleofholding.com/index/current]. The offer ends April 9.