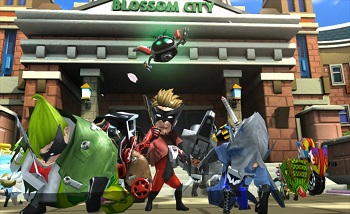 According to designer Hideki Kamiya The Wonderful 101 will launch with everything Platinum Games wanted.

Downloadable content this generation has become something of an expectation. While some gamers hold particular contempt for things like <a href=http://www.escapistmagazine.com/videos/view/jimquisition/5625-On-Disc-DLC-Cannot-Be-Justified>on-disc and <a href=http://www.escapistmagazine.com/news/view/123194-Bethesda-VP-Defends-Day-One-DLC>day one add-ons, others enjoy and look forward to DLC, hoping to prolong their time with a game and build on the out-of-box experience. Developers and publishers in turn are generally more than happy to provide said content and, of course, expand on a title's profitability over the long term. That said, not everyone views DLC as a necessity.

Hideki Kamiya, a designer at Platinum Games, for instance, doesn't foresee its forthcoming Wii U title, <a href=http://www.escapistmagazine.com/news/view/124846-The-Wonderful-101-Gets-Multiplayer-Release-Date>The Wonderful 101, needing any DLC. Responding to a question on Twitter, Kamiya said the following. "We put all we want to do in [The Wonderful 101] so [you] don't need DLC," said Kamiya. While none of this is an official statement pointing to a complete lack of future DLC for the game, it's nonetheless somewhat nice to think that when you buy The Wonderful 101 you could be getting the complete package, as opposed to having to wait for an ultimate edition or something similar down the road.

If The Wonderful 101 does wind up being DLC-free, it could potentially become something of an anomaly among exclusives released on Nintendo's platforms. While Nintendo's commitment to DLC in the past was arguably less than the likes of Microsoft or Sony, the company has shown <a href=https://www.gameinformer.com/b/news/archive/2013/01/10/nintendo-outlines-dlc-for-fire-emblem-awakening.aspx>some signs of <a href=http://www.escapistmagazine.com/news/view/125246-New-Super-Luigi-U-DLC-Joins-Wii-U-eShop-Offerings>investing more heavily in it as of late. Zelda producer Eiji Aonuma has even suggested that future entries in franchise like The Legend of Zelda could see content <a href=http://www.nintendolife.com/news/2013/06/exclusive_zeldas_aonuma_were_looking_into_going_beyond_the_disc_with_dlc>"beyond what is on the disc" in the future.

So, guys? Please? Buy this game? For me I don't like how DLC is done nowadays. I loved it back when they were full on expansion packs that added new areas, new NPC, and a bunch of other things. Nowadays DLC is abused to hell, especially by Capcom.
I welcome the thought of a game not having DLC on it, but I shuddered when I read about the Zelda thing because in my opinion Zelda games do not need DLC at all.

Seriously, of all the new IPs coming up, this is looking the most awesome, I really hope we don't end up with another Okami on our hands.

Daystar Clarion said:
Seriously, of all the new IPs coming up, this is looking the most awesome, I really hope we don't end up with another Okami on our hands.
Click to expand...

The level I played at PAX was quite a bit of fun.

Would be a shame if this very unique title doesn't take off.

At any rate, good on them for this! I'll always say if something isn't beyond the scope of your development team and time (like an expansion pack or some such) then it doesn't need to be DLC at all.

Old gaming mainstays like secrets, unlockables, development material (like concept art, etc.) and such have been replaced by DLC in most cases. Instead of all this awesome stuff packed into the game you can get by, you know, PLAYING the game, it's just sold separately for more money than it's worth.

I'm sure if Capcom had their way over Clover Studios, all of Okami's alt skins would've been DLC.
I

Neronium said:
For me I don't like how DLC is done nowadays. I loved it back when they were full on expansion packs that added new areas, new NPC, and a bunch of other things. Nowadays DLC is abused to hell, especially by Capcom.
Click to expand...

Agreed. I'm pretty sure that noone had a problem with expansion packs back in the day, even though they tended to match the cost of the original game (at least at launch), because it was generally accepted that, yes, they were trying to milk you for a game you already own, but it felt more like they were adding onto a game you've owned and enjoyed for a long time, rather than simply withholding parts of the 'full game' and forcing you to pay even more for your $60 AAA title you just got at launch.

I don't think it's wrong for a company to start adding DLC in a few months after the game comes out (maybe that's still too soon, but you get my point), especially with titles where you're unlikely to see a new installment until, say, the next console generation or two (looking at you, Nintendo). The problems and anger only occur when you force people to pay money on top of what's already a premium priced product to get what's already on the disk. I also don't have too much of an issue with Day 1 COSMETIC DLC (e.g. skins, sound packs, etc), on-disc or otherwise, even though such things used to be standard unlockables, but that's my opinion.
Show hidden low quality content
You must log in or register to reply here.
Share:
Facebook Twitter Reddit Pinterest Tumblr WhatsApp Email Link
Top Bottom