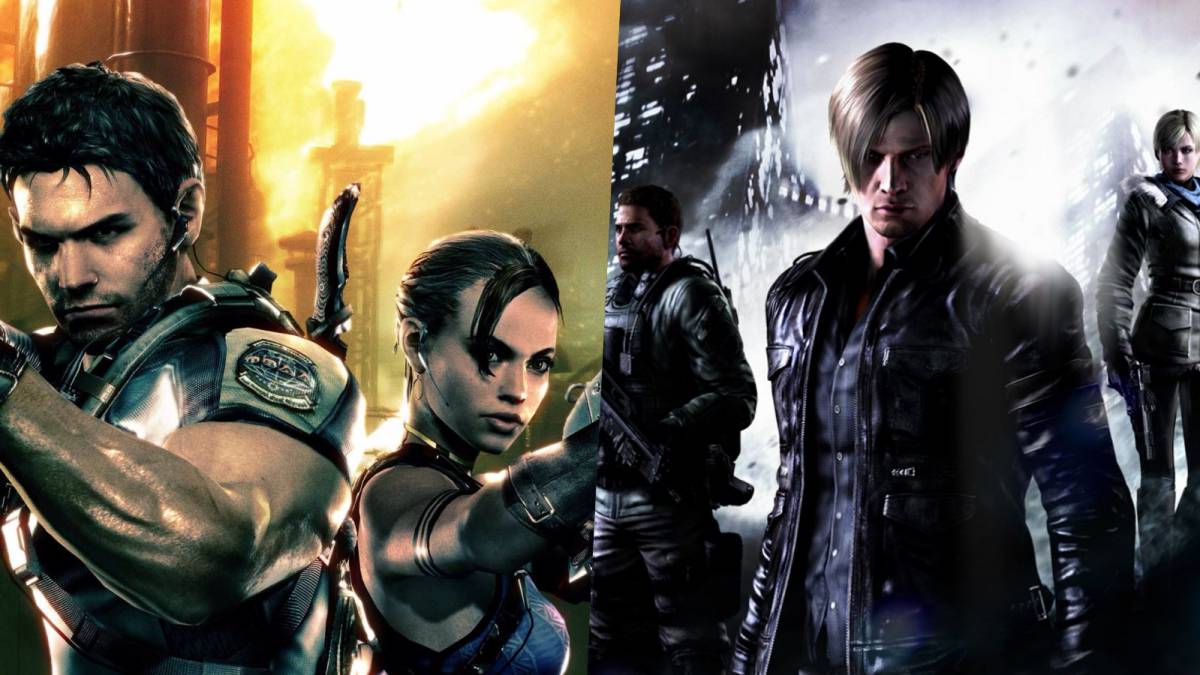 Resident Evil 5 and 6 have been the subject of substantial controversy, and perhaps understandably so: after multiple installments of (mostly) restrained and atmospheric survival horror titles, the series began to take heavy inspiration from contemporary action movies, following in the footsteps of auteurs like David Cage so as to pursue a true cinematic experience. Really, if the gaming community still has yet to accept Cage's genius, then what hope did an established franchise such as Resident Evil have of breaking away from its distinctively game-like roots? As an unfortunate consequence, people do not give these games the credit they quite deserve, whether as profound thematic works (5 being a cross-adaptation of Heart of Darkness and Dark Alliance, and 6 being a masterpiece of surreal action cinema made entirely out of setpieces) or, more importantly, as deeply engaging cooperative experiences. I could discuss the many nuances of their emergent, asymmetrical gameplay for hours, but I will instead focus on one specific element that each has explored in a very different way: the use of voice commands.

In most conventional cooperative games, it's essential for players to be able to communicate with enough complexity so as to adequately raise awareness of any and all situations that may come into play. If you cannot use voice chatting (whether for lack of functionality or hardware) or text chatting (also whether for lack of functionality or hardware, you console-playing bastard child), there will ideally be built-in voice lines or gestures so as to allow players to interact in a way that extends beyond punching each other. Resident Evil 5 is the first game in the series to offer a full cooperative campaign; consequently, it's also the first with voice commands. In hindsight, the system looks quite rudimentary: all you can do is tell your teammate to "go", wait, or follow you, thank them, ask for an item, yell their player character's name and tell them to hurry up in context-sensitive situations, or answer any of those previous statements with an affirmation of the likes of "OK". However, if it's had such staying power over the years, it is precisely because of its simplicity, allowing each voice line to take a life of their own through constant use, and I do mean "constant": the cooldown for each of these commands is very low, allowing for endless spamming of "Chris! Hurry up! Hurry up! Hurry up! Chris!" (You can take this cooldown even lower by holding the flashlight in the caves in Chapter 2-2; we don't know how to keep it outside of this section, but voice% speedrunners are hard at work on figuring this problem out.) The end result is an extremely snappy communication system where players can easily hammer their instructions in their teammate's ears, further encouraging interaction -- even if it's through esoteric means such as stunlocking Chris with a cattleprod.

Resident Evil 6 is a very different beast. In a way, its voice commands are to RE5's what Half-Life 2 was to its predecessor: they have lost much of their frantic pace due to a slower cooldown, meaning that the spam tactics of yore have become a shadow of their former self. For what RE6 lost in speed, however, it gained in sheer complexity. There are now two extra commands, allowing you to praise your teammate or tell them to fall back, along with the added option to say "yes" or "no" to their orders. Mind you, these additions pale before the real breakthrough: the voice clips are now more context-sensitive than ever. Depending on the level of danger in which the players find themselves, the volume of these commands will vary. In stealth sections, the two characters will speak quietly; when everything is exploding, they will yell their lungs out like it's World War I and the Germans are dropping the mustard gas again. If that isn't enough, the exact voice clip associated with each command changes based on the character and their state of mind throughout their story. The most famous example has to be Chris, who, upon recalling the death of Finn, starts giving Piers angry, back-handed compliments before he ultimately gets over it at the end of his campaign. There's no doubt about it: other co-op games could only dream of using voice commands as an extra layer of depth to the story and gameplay as RE6 does.

With all this in mind, it's rather clear that each title takes the opposite approach to the same mechanic, and they both do an excellent job in their own right -- unlike the OFF vs. OneShot vs. LISA vs. Undertale review, there isn't a clear wrong answer that, if it were to be chosen, would do much to harm the credibility of a gamer's opinions. People generally seem to prefer the compact efficiency of RE5's voice clips, and I have plenty of love for them myself, but I will have to take a fairly controversial stance and declare RE6 the winner. In the same way that Dark Souls' environmental storytelling made me appreciate the value that lore can have in the playing experience, 6's voice clips have allowed me to get immersed in a way that I have had ample trouble finding in other video games ever since I had first discovered it. When I spam the partner action key as Sherry so as to tell Jake to come over and open a goddamn door and she starts yelling in the middle of a stealth section, the tension is absolutely palpable.