Do you still base your game purchases on whether Yahtzee recommends it?

The only time I did was with Call of Duty 4, I think. And maybe Batman: Arkham Asylum.

No, I haven't let critics decide if I should buy a game or not in many, many years.

Zero Punctuation is mainly entertainment vs a real critique. However, if you read between the lines, you can gleam some pretty useful information from Yahtzee about the game. Most of the time when he doesn't criticize gameplay, the game is usually good. And, of course, if Yahtzee doesn't like something that doesn't bother you, then it's not a big deal.

What would I have left to play if I only bought things he's not negative about!?

Not completely, as I like several games and franchises he's slammed before. I mean, just look at my goddamn profile pic!

However, if he recommends something, that immediately catches my interest and makes me look more into it. I've bought a few things he recommended that I would have otherwise missed out on.

Once or twice I've taken the plunge based on his recommendation, and most times its worked out.

I take him into account sometimes. Certainly I'll watch his ZP on a game if I'm thinking of buying it. I got Shadow of Mordor and Just Cause 2 based on his recommendation, and enjoyed both.

Other times meh. Still don't see what's so great about the Souls games. They're...alright. But nothing to write home about.
T

Never did. I may have been influenced by him to give Painkiller a second shot but, otherwise, no. As it is, his schtick with the Wii and how he embraced backlash against "casuals" showed that he really wasn't a critic but an entertainer. Given that a lot of his gimmick goes along with what the Escapist community was already thinking, it is unsurprising that a number of people on the Escapist embraced him as their go-to guy for game opinions.
B

Only game i ever picked up because of him was Bioshock

I never did. I used to watch him purely for entertainment. As far as i can remember he somewhat liked only a couple of games. I would have nothing to play if i took him seriously.

Did anyone ever? He was always "review-themed entertainment" rather than a proper review.
M

Buccura said:
I will always watch Zero Punctuation and think Yahtzee is a fantastic entertainer, but as a critic I can't help but feel like I feel less and less like my opinions align with his. I'm not going to say I disagree all the time but I just don't use him as a source of actual critique much anymore. It might be because I can't get new games as often as he does, so I don't really feel the fatigue he would have on particular genres like open world games. I also don't need a game to be brutally hard for me to enjoy it. But regardless, I just find myself watching him for laughs rather than to get any insight on the quality of a game.
Click to expand...

I watch him for laughs but yeah. he's a critic and his critique is based on his opinions and tastes. There are somethings he just doesn't like. I mean he dumps on Borderlands 1 & 2 but I thought those games were a great blast.

I used to, at least on a few occasions but not always. Let's Plays are my primary source of judgement now. I want/need to see the first ~15 minutes of a game to know if I'll like it or not. Many times, character creation is very important to me and I want to see if I can at least choose female. Not a dealbreaker, just a preference (example: I'll always buy an Assassin's Creed game).

Yahtzee started shortly before the LP craze really hit its stride but now I'm older, mature, and aware of the few facts on very specific Yahtzee-based opinions that completely counter my own. He loves Dark Souls, and I despise challenge. I prefer fun over challenge (and we both adore Saints Row).

Yes. I want someone able to tell me in a credible way whether something is worth buying, and Yahtzee does that better than most reviewers. I can't afford the time or money to play a lot of games, so I want someone able to clearly tell me what's worth it. As he's a solo reviewer, his own time matters to him a lot too, so he's going to behave like me as a consumer; pissed off if his time is wasted, and wanting stuff to stand out above the rest (this doesn't happen as much with review publications with teams of reviewers, who are given at least a little more time to work on stuff).

Also, he doesn't review in a conventional way, but that works better for me; if a mate was recommending a game to me, he wouldn't write a step by step 700 word review, going through graphics and replay-ability, he'd just mention the few main points that stick out in their mind and you'd probably would value what they have to say. 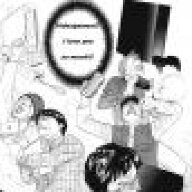 Yahtzee is much funnier than he is an analytical critic. In general I found that most game critics are rather poor at what they do; some sites have/had good ones that broke down the games and explained what you could expect from it, who would be interested in it. Now I go more by word of mouth.

Yeah but it rarely happens. I can only remember three times that I purchased a game based on yahtzee's recommendation and the last time was Elite Dangerous.

I don't think I've ever passed on a game based on Yathzee's criticisms of it.

Ummm, does being an entertainer mean that your opinions on games are invalid or something? Because that seems to be a pretty commonly held opinion here.

OT: I don't generally play new games so not really. I have played some pretty good games on his recommendation though, like Psychonauts, Grim Fandango, FTL, Binding of Isaac, actually quite a lot now that I think about it.
T

Drathnoxis said:
Ummm, does being an entertainer mean that your opinions on games are invalid or something? Because that seems to be a pretty commonly held opinion here.
Click to expand...

It's kinda like listening to Sean Hannity. Both of them might have valid opinions on their subject manner but you need to be aware that they:

1) are preaching to the choir
and
2) have bias that make their opinions less useful than someone who tries to come at the subject from a more neutral viewpoint.