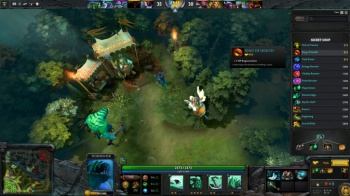 MOBAs have always made for good spectator sports. The teamwork and coordination required to succeed, combined with the personalities and trends surrounding big-time players, have given games like Dota 2 a more or less perpetual spotlight when it comes to eSports. This is no secret to the developers, and Valve's latest patch to Dota 2 caters specifically to those who like to watch: Fantasy Dota leagues are officially open for drafting.

The first fantasy leagues will follow the upcoming ASUS ROG DreamLeague Season 1, which begins on March 3. Dota players can head over to the Community tab and join six-player Fantasy Leagues with their friends, after purchasing a $10 season ticket for the tournament. While the pro gamers compete for a $100,000 prize pool, you and your friends can compete for bragging rights by drafting from the world's best Dota players.

Your Fantasy Dota roster can hold eight players: two core (mid, off-lane, or carry players), two support, a wild card, and three slots on the bench. As the players in your active roster play in tournament matches, you'll rack up points in your League. Pretty much anything a player does can earn you points - from killing a tower or Roshan for one full point, down to earning .0004 points per heal.

eSports have struggled for a long time to earn legitimacy, and (in a way) this brings them one step closer. Sure, it's kind of silly to track the stats of pro gamers as they track the stats of virtual champions, but it's good fun and it's bound to make some waves among Dota fans. And of course, props to Valve for creating this in-depth system for the community.

I had originally tried to think of something witty to write about this but nothing really captured how I felt. Instead I am going to just go over here and feel sad now.

I just wonder if it will kick off outside the US as fantasy leagues between colleagues and friends are not very common in Europe.
M

Not especially new, TI3 already had it and before that there were (less accuarte) third-party-solutions, but it sure doesn't hurt the game. I think it's fun.
8

Symbio Joe said:
I just wonder if it will kick off outside the US as fantasy leagues between colleagues and friends are not very common in Europe.
Click to expand...

There's this wonderful thing called the internet which lets you connect to anyone in the world regardless of geographic location. I have literally no fellow European friends with which I play Dota with, but I have a number of American, South American, and even Asian friends who'll be into this feature.
M

Symbio Joe said:
I just wonder if it will kick off outside the US as fantasy leagues between colleagues and friends are not very common in Europe.
Click to expand...