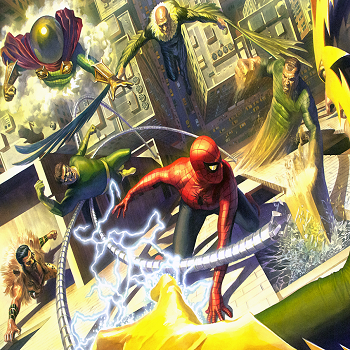 Despite Marvel's plans for otherwise, Daredevil EP Drew Goddard isn't giving up on a "Sinister Six" movie just yet.

Drew Goddard has quite the track record of success. In addition to co-writing and directing the Internet's pick for "greatest horror film of the 21st century", Cabin in the Woods, he also served as an executive producer on Netflix's highly-praised Daredevil series, an EP on Lost (remember Lost?), and the screenplay writer of both Cloverfield and World War Z, and Ridley Scott's upcoming space epic The Martian, which currently holds a 95% rating on Rotten Tomatoes ahead of its October 2nd premiere.

Goddard was also the man expected to write and direct a "Sinister Six" movie until it was announced that that *other* SS-abreviated villain supergroup movie [http://www.escapistmagazine.com/news/view/139777-Marvel-and-Sony-Confirm-That-Spider-Mans-Joining-the-Marvel-Cinematic-Universe] to soak up all the glory -- Goddard maintains hope that it will one day become a reality.

"I intentionally wanted a movie that didn't have to worry about mythology and continuity," said Goddard in a recent interview with i09 [http://io9.com/the-sinister-six-movie-could-still-happen-after-all-if-1732443590].

"It was important to me to make a movie that could stand on its own. So the good news is, it slots in very well to any plan anybody ever wants. We just need to let a couple years go by, I think."

That being said, Goddard is also a huge fan of Marvel's plan for Spider-man.

"The tricky part about all this is I love this plan. I love that you get to see Spider-Man in Marvel movies. I think that's a great thing. I'm on board with that decision because as a fan that's what I want. So who knows what the future holds? This is Hollywood, man, you've gotta play the long game."

Of course, with the *newest* incarnation of Spider-Man not set to hit theaters until June 28, 2017 [http://variety.com/2015/film/news/spider-man-marvel-sony-movies-1201429508/], the idea of a "Sinister Six" movie happening in even a couple years seems dubious. I guess those of us desperately seeking a reboot of a reboot will have to be satisfied with Tom Holland's cameo as Spidey in 2016's Captain America: Civil War for now.

If DC would actually pay attention to the gaps in Marvel's strategy they could make a killing. Can you imagine if they started over and just focused on their stable of villains? They have some of the most iconic villains in comic history and a proper Legion of Doom movie could go a long way to setting them on righting the ship.

And then I can dream of a day where they have the Legion of Doom/Avengers crossover film and weep silently at its majestic impossibility.