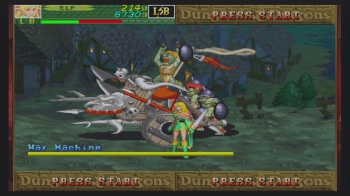 Capcom plans to launch Dungeons & Dragons: Chronicles of Mystara this June, and to properly promote the title the firm has revealed the host of new additions it's added to the seminal arcade brawlers included therein.

Dungeons & Dragons: Chronicles of Mystara, like many of Capcom's recent downloadable releases, is an upgraded compilation of two of its earlier games. Specifically, Chronicles collects Dungeons & Dragons: Tower of Doom and Dungeons & Dragons: Shadow Over Mystara, two side-scrolling beat 'em up titles previously exclusive to the arcade (and, arguably, the Sega Saturn, but good luck finding a copy of that gem). These games are best described as more complex variations on the Final Fight theme that happen to feature storylines, weapons and characters rooted in Dungeons & Dragons mythology. If this description doesn't immediately excite you, you may be dead inside.

When Chronicles hits the Xbox Live Arcade, PlayStation Network, Wii U and PC platforms this summer, it will feature a $15 price tag. That would be a bit spendy for two games released nearly two decades ago, but as with all of its recent rereleases Capcom is packing this thing full of new content and gameplay options. This morning the company shed light on what we can expect.

Like most of Capcom's recent fighting game releases, Chronicles will feature online co-operative gameplay powered by the rock-solid GGPO netcode framework. This is a crucial addition to the game, as while it does feature local co-operative gameplay, few people have a partner in which to play a game like this at any time they desire. Both of the titles in this package were initially designed to be played by multiple people at the same time, and the prior console release (that aforementioned rare Saturn title) only offered a maximum of two player simultaneous play.

Further, Chronicles will also feature in-game Challenges akin to those seen in the excellent Darkstalkers Resurrection [http://www.escapistmagazine.com/articles/view/editorials/reviews/10251-Darkstalkers-Resurrection-Review]. As with that game, these provide extra motivation for players to explore every iota of a title, and will necessarily extend the game's online and offline lifespan. Further, meeting these goals will offer players in-game currency which can then be exchanged for bonus unlockable items in the game's Vault. Assuming Darkstalkers Resurrection is the model for this, you should expect concept artwork, new aesthetic options and sound test items among other miscellanea.

Continuing the theme of building on Capcom's success in rereleasing its classic arcade fighters, Chronicles will also feature a full suite of aesthetics options that allow players to custom tailor their gameplay experience as they see fit. Want to play Chronicles as if you were standing in a smoky arcade circa 1995? You're welcome to it. Likewise, while static high score tables don't make much sense for a home game, Chronicles will feature such a thing, as well as online leaderboards and extensive stat-tracking options. Think of this as an "everything and the kitchen sink" approach to game design.

Most intriguingly, Capcom promises a "House Rules" option that allows players to alter the game's basic functionality in whatever way they see fit. Want more health pick ups? How about unbreakable equipment? Simply flick a toggle and you're suddenly swimming in inexplicably healthy chunks of meat while swinging a blade made of what appears to be Wolverine's shin bones.

A full run down of all the additions to be found in Dungeons & Dragons: Chronicles of Mystara can be found at the official Capcom Unity blog. Expect a solid release date to emerge soon.

piscian said:
I have it for sega saturn. I've had it since I was 16 no you can't touch it.
Click to expand...

I'd recommend you eBay it before the XBLA/PSN game is released. It's valuable now, but that's about to change in a big way.

The network play is a great addition, I may gather my old arcade buddies (all now living in different places far away) to relive the memories of fighting beholders.

They should release that Armored Warrior mech beat'em up hat I saw in Game Informer.
That looked like a hell of a lot of fun.

I'll most likely get this at some point though.

piscian said:
I have those as well. Honestly it's all nostalgia value to me I'll never sell them.
Click to expand...

That's valid. I'd probably do the same if I could ever find a copy of the Saturn D&D release ... or still had a functioning Saturn.


piinyouri said:
They should release that Armored Warrior mech beat'em up hat I saw in Game Informer.
That looked like a hell of a lot of fun.
Click to expand...

I'm with you on this one. Armored Warriors was awesome, but never found any real success in the US. It's as likely to see an XBLA/PSN/whatever release as Warzard (read: if it ever happens, I'll eat every hat within a 50 mile radius).

now what we need is for someone to do a decent D&D-based fighting game. It'd be interesting to see how they'd translate the basic stuff over.
A

When is Dragons Crown going to be released? I can see these two competing.

I'm excited for Dragons Crown because it reminds me so much of this series of game, I wonder how they will stack up mechanically.

I enjoyed the games a lot when I played them in arcades, but boy, does it need those house rules. The things were serious quarter-eaters.
Z

Huh... I get one more chance to get my face chewed off by Ezerhorden... DO WANT. This game is probably the best translation of basic DnD available. Tons of Easter eggs, secrets and a plays really well besides (the magic popup menu for items/spells was genius). Absolutely worth $15 if they added new content on top of the regular game.

I wish this would get a PC release also. This game was awesome.

This sounds pretty interesting, especially the extra features and whatnot. I played it emulated on PC and it was fun, especially the second one with a variety of characters and abilities/moves etc but it was clearly designed to have you sticking a coin in the slot every minute or so. Despite having access to the originals, I think I'll get this.

Clive Howlitzer said:
I wish this would get a PC release also. This game was awesome.
Click to expand...

Allow me to grant your wish


Earnest Cavalli said:
When Chronicles hits the Xbox Live Arcade, PlayStation Network, Wii U and PC platforms this summer, it will feature a $15 price tag.
Click to expand...