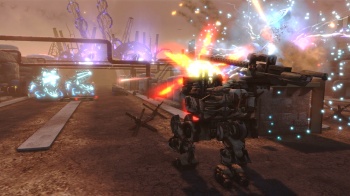 Double Fine goes back to the trenches.

I really love games that combine genres. I think some of the best games in recent years have been those that don't fit neatly into a category, but instead take elements from different genres to create an experience not quite like any other readily available in gaming. This is what drew me to Trenched, an upcoming Xbox Live Arcade game from Double Fine. Part tower defense, part third-person shooter, Trenched combines hectic mech shooting action, cooperative gameplay, and strategic defense into something really different, as well as being a lot of fun.

Set after World War I in an alternate history, the trenches are actually giant war machines that the players control on the battlefield. In between fighting off wave after wave of Monovisions, television-based robotic creations hell-bent on destroying you and the base you're trying to protect. Between waves, you can upgrade your trench at your base, and lay down Emplacements. With both offensive and defensive capabilities, Emplacements come in several different varieties but work just as laying down towers in a tower defense game would. With some well-placed Emplacements, you'll be able to slow down the Monovisions and thin their ranks, making it easier to shoot them down or lob an explosive at the last few stragglers.

Trenched offers up to four-player co-op, but I only played with one other person. At first, with neither of us really knowing what was going on, it was chaos. We weren't really working together, and both of us were shooting wildly and not approaching the situation very strategically. Before long, though, we seemed to get into a groove, and without a word we were able to stop seemingly endless waves of Monovisions from destroying us and our base. The Monovisions take different forms, with some crawling on the ground, the more annoying breed flittering through the air, and even one type that was fiery red and extra powerful. When my partner was knocked down, I helped him up, and we got back to work.

With all the shooting, upgrading, protecting, placing Emplacements, and hordes of Monovisions, you can imagine that Trenched is much more hectic than many strategy titles. What I like about it is that the action never really stops; even without another group of enemies rushing at you, there are still things to be done, upgrades to be made, defenses to be fortified. Even though the game seemed tricky at first, it didn't take long at all before I knew what I was doing and was ready to take on that next wave.

Combining genres isn't new for Double Fine; they also did a good job of it in Brutal Legend [http://www.amazon.com/Brutal-Legend-Xbox-360/dp/B000XJNTPG/], and the developer is known for its quirky, offbeat games. Trenched manages to be very much a Double Fine title while still being unlike anything the company has made before. It may not be something you want to take on solo, but with good teamwork and good strategy, Trenched can quickly become addictive. If you have a few good friends, this downloadable game could command your attention this summer, so get ready to get trenched.

I cant wait for this game. Looks like loads of mechanical mayhem... 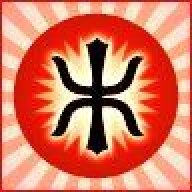 This does look interesting, since Sanctum I have been enjoying the more interactive tower defence games.