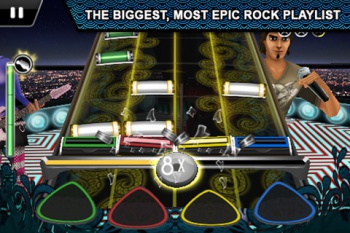 The Rock Band iOS games are going away, for real this time.

Rock poet Bob Dylan once quipped that "knock, knock, knockin' on heaven's door [http://www.youtube.com/watch?v=vCWdCKPtnYE]. EA's deal with Harmonix is at an end, and if you want to buy Rock Band or back up your existing content for local play, you have until July 31 to do it.

Rock Band and Rock Band Reloaded, like their console brethren, thrive on libraries of downloadable songs. Luckily, would-be rockers who poured their gig money into game tracks can save their investments with a little proactive thinking. Launching either app, accessing the Music Store, and selecting "Restore Purchases" will save you some grief in the long run. As long as your purchased songs are downloaded to your device or synced with your iCloud account before the end of the month, they're yours to keep. However, once the deadline passes, EA's hands are tied. "[Due] to the expiration of the licensing agreement between EA and Harmonix, you will be unable to recover previously purchased songs not stored on your device or not backed up to iCloud," EA's website advises.

Giving consumers only a week to protect their purchases is cutting it a little close, but it sure beats the game suddenly ceasing to function without explanation back in May. Furthermore, since Harmonix has expressed no interest in renewing its licensing agreement with EA, perhaps a new Harmonix portable title is on the way through another company. Consumers, as always, will just have to go with the flow, like a rolling stone [http://www.youtube.com/watch?v=hk3mAX5xdxo].

"Furthermore, since Harmonix has expressed no interest in renewing its licensing agreement with EA, perhaps a new Harmonix portable title is on the way through another company."