Enough Light Amongst the Dark - A review of Alan Wake

As a self-professed psychological, action thriller, Alan Wake seems underwhelming in each of these categories. The psychological aspects remain sidelined to the games story, while the bulk of the game consists of a series of simplistic action sequence marinated in watered down horror. This doesn't necessarily make it a bad game though - merely leaning towards average. Where the game lacks in its most touted categories, it makes up for it with an at least interesting narrative, which is all the better for Wake's constant, hard-boiled narration. Alan Wake isn't great, but it is different, quirky and imaginative and for that alone it's worth the experience.

You are Alan Wake, a best-selling author come to the sleepy town of Bright Falls to get away from the frustration of writers block. Yet not long after your arrival the town plunges into darkness, evil and mood-setting eldritch mist. The unspeakable evil that you've apparently awakened has kidnapped your wife, you're pissed off, and the local law enforcement just doesn't seem to understand what's going on. Step-up Wake to sort things out, banish the monsters and save the girl. The plot doesn't take many interesting twists, but it's never-the-less well told, with Wake's narration keying you into the sympathetic - if occasionally brash - character of Wake himself, as well as short asides which give some superfluous background on some of the supporting cast. It's not the substance, but more the deliverance of the plot which makes it entertaining, not quite unlike the noir style of Remedies earlier Max Payne. Each chapter ends with an instrumental interlude and while this sounds like a ridiculous thing, it's actually well-placed, offering pause for reflection on the cliff-hanger before . It helps a lot that the licensed soundtrack is masterfully chosen, suiting the desired mood of the chapter before to absolute perfection.

The environments in Alan Wake are stunning, but unfortunately there's little in the way of variety.​
The game will take you just six-short chapters to complete - each one lasting little over 90 minutes, and each one will take you through a forest with as much shadow and swirling mist as there is palpable atmosphere. The problem will begin at about the third chapter where you begin to realise that this is the only trick the game can pull. There is the odd connecting piece of gameplay taking place in day, amongst civilisation, but this only contrives to lead you to another spooky, fir-ridden forest. The bulk of the game revolves around Wake fighting 'The Taken' - people shrouded in darkness who are impervious to damage until the shadows shrouding them are cut away with light. This mechanic keys into the mood of the game quite well, with one of Wake's most valuable assets being a humble flash-light and a bumper pack of batteries. The parts of the game where you're whipping your beam of light about the shadows, alone and on-edge, are some of the best, but the actual introduction of enemies tends to hamper the mood rather than thicken it.

Enemies are announced with a shriek of strings, and usually a close-up, destroying all sense of surprise and all of the tension. Soon into the game you'll become happy to just run through the forest, the ambience lost on you, simply because you'll be confident of knowing when the bad-guys will show. The only frightening parts of the game come when you think you can hear an enemy around you but the game hasn't cued you in yet, and usually this is just you scaring yourself - something the game would have done well to contrive more of. The game provides you with the mood and the right environments every single time, but fails to take the last step to actually make it frightening, rather than just simply atmospheric. When the enemies leap out to a crescendo of strings, it seems like just a chore to burn the darkness away with the flashlight and then blast them with a few bullets to put them down. 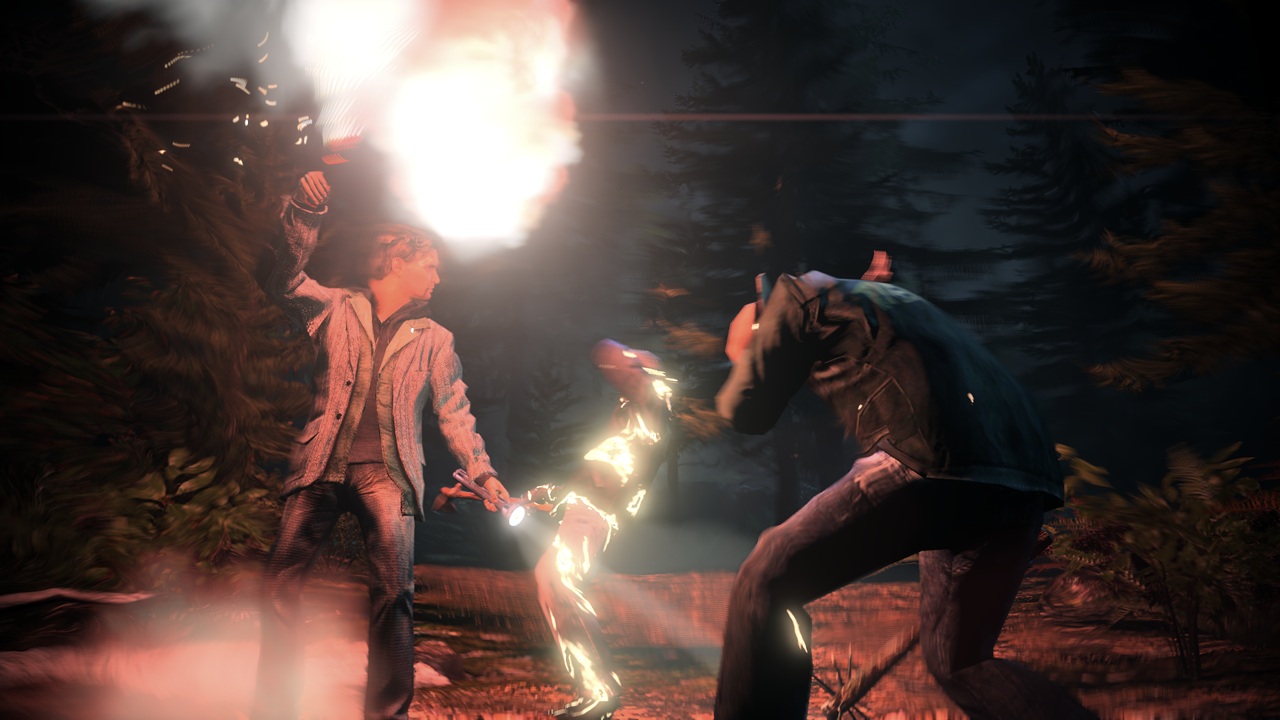 Being a very literary themed game, Alan Wake attempts to remove the distinction between real and unreal; fact and fiction.​
There are a variety of ways to kill 'The Taken', but none really change the dynamics of play very much. In addition to the simple flashlight and revolver combo, you'll pick up rifles, shotguns, flash bangs and a flare-gun, and occasionally you'll be behind some headlights in a car that handles dreadfully. These can be used for the more overwhelming pack of enemies, or the games bigger, more resistant enemies, but even then the familiar light and bullet combo is the same. Once this primary combat mechanic is established, the game seems happy to wallow in it, never changing it to offer any significantly new experiences. The game doesn't seem to want to surprise you, which is a contentious move for a thriller to take. Along the linear forest paths, and on divergent routes, you'll pick up manuscript pages for a novel you can't remember writing. Most the time these pages key you in to events happening just around the corner. This plays nicely with the literary themes of the game, and in some instances the pages succeed in creating a sense of foreboding and dread for what's to come, yet equally they'll spoil moments ahead which would have been better received for their surprise. With this in mind, some players might pass on collecting the pages, preferring instead to march into the shadows unaware of what's to come.

Bottom Line: You won't be playing Alan Wake for exhilarating combat. Even in the cases when ammo gets scarce - which will vary depending on difficulty - it's not difficult to run for the next streetlamp while 'The Taken' shamble ineffectually after you. If you choose to play Alan Wake at all, it'll be for the unique deliverance, it's captivating music, it's haunting forests and its immaculate presentation. The game doesn't control badly or feel boring, it just fails to thrill in the way in which a thriller should. The triumphs of the game - while not exactly roaring beacons - are none-the-less welcoming lights that will guide you easily through the darkness to a satisfying ending.

This a review that I wrote back in September last year, but neglected to post on this forum. There's also reviews for Sonic 4 and Costume Quest that I've yet to upload, so I'll do them in the coming days.