Epic Is The New Card Game From Star Realms Creators

Epic Is The New Card Game From Star Realms Creators 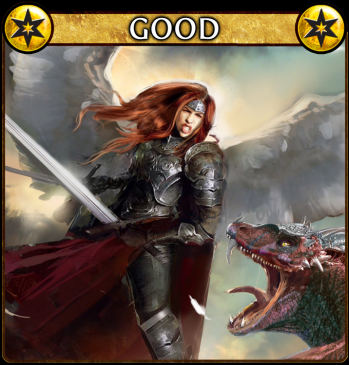 Can this game capture the magic of a trading card game in a tiny package?

White Wizard Games has launched a Kickstarter for a new game, titled simply Epic or Epic Card Game. The game looks to be doing for collectible, competitive trading card games what Star Realms [http://www.escapistmagazine.com/tag/view/star%20realms?os=star+realms] did for deckbuilding games: Provide the experience you'd get with a much larger game in a much smaller package. The game is a set of cards which allows up to four players to participate in a standard, draft, or sealed playstyle. Adding more sets of the cards adds more players to a game, scaling up to what the Kickstarter calls their "Epic Cube" for sealed and draft at three sets. Individual sets of Epic will eventually retail for $15 MSRP. The Kickstarter page admits plans for expansions, but say that the game is intended to provide as complete an experience as possible with one set.

In the game, players will deploy creatures and cast spells to reduce their opponent's life total from 30 to zero before their opponent does the same. Each turn, players get a single piece of "gold" to play cards with, and most cards costs either a single gold or are free to play - meaning that Epic eschews the slow ramping of resources that most other trading card games employ. The cards are divided into four colors representing four ideals: Yellow for Good, Red for Evil, Green for Wild, and Blue for Sage. The sets of cards representing each of these colors in the base game are balanced against each other to form four decks.

Designers Robert Dougherty and Darwin Kastle are both trading card game of the same name, [http://www.escapistmagazine.com/tag/view/magic%20the%20gathering?os=magic+the+gathering] but supposedly only has a few mechanics in common.

If you're not familiar with what Wihite Wizard Games is capable of, go ahead and check out our Star Realms Review. [http://www.escapistmagazine.com/articles/view/tabletop/reviews/12782-Star-Realms-and-Crisis-Expansion-Review-Introductory-Deckbuildin]

If you already know you're interested, you can find the official Kickstarter page here. [https://www.kickstarter.com/projects/1172937197/epic-card-game]