The way they describe Britain, it sounds like Germany but with worse weather and a bit more hooligans... xD
there is the same amount of shameful feelings surrounding everyone as soon as someone mentions any religious figure or quote, and as soon as you have a german flag anywhere near you when there is no ongoing Football world/eurocup everyone looks at you like you're a Nazi xD And don't you dare singing along the freakin anthem!

well but at least we have better weather 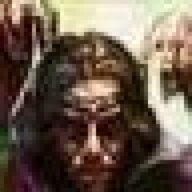 Evonisia said:
I didn't realise how British I was until after this video. I'm not sure whether I should be ashamed of it or not now.
Click to expand...

You should be proud, but then embarrassed of your pride. Like the rest of us Brits.
F

It is true about us Brits being the masters of casual racism but we have the innate ability to hate everyone and everything, and that includes ourselves and our own culture. Basically we are good at hating everything and taking the piss out of everything as well, sometimes snidely with sarcasm.

However we don't like other people saying that we are crap. We can say we are crap, but not anyone else, that's just not cricket!

(cricket being a game that seems to be only played by us and the former colonies, who are now much better at it than us )

Muspelheim said:
I wonder if Yatzhee will one day stand up to his ankles in exotic dildoes following this.
Click to expand...

Yeah, I think there's a certain grim inevitability to that.

Great panel, though. A pleasure to watch and I really enjoyed seeing the three relax and answer non-game related questions. Also I'd always been a bit curious as to why they'd left and where they were initially from, and it's so satisfying to have those questions answered. Cheers!

Oh, giving digestives to a British person is like catnip to us. If you want our attention just break out a packet of those and a decent pot of tea and we'll happily (yet passive aggressively) pretend to listen to whatever it is you're saying.