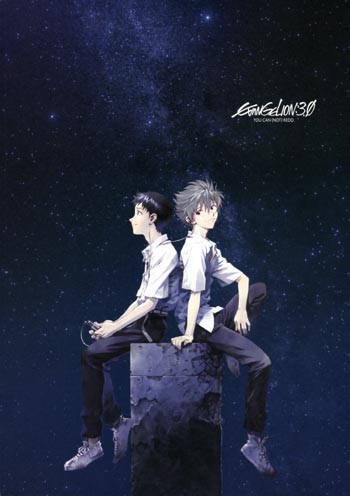 Five pairs of tickets to see Evangelion 3.0 will be given away to participants tomorrow.

Evangelion 3.0: You Can (Not) Redo hits theaters in the United States and Canada this Friday. For fans who haven't already booked tickets to see the third rebuild movie in the well-known series, FUNimation is offering a chance to win a pair of tickets until tomorrow night.

FUNimation has five pairs of tickets to give out. Five winners will be picked by random - three from Facebook and two from Twitter. Winners will be notified tomorrow via Facebook and Twitter, and they will need to provide a valid photo ID to claim tickets at will call. Tickets are valid for any participating theater, a list of which is provided here. [http://www.elevenarts.net/evangelion3.theater.html] Some showings will have a viewing available in Japanese with English subtitles while others use the English dub.

Evangelion is regarded as a classic. The rebuild movies, of which there will be four, or a reboot of the original Neon Genesis Evangelion TV series. The fourth film will have a completely new conclusion, and the films have diverged from the TV series, making them a great watch for both new and old Evangelion fans.

Too bad they dropped the ball in this one. The films were turning out pretty awesome until this point. Well, it is Eva... should be expected, I suppose.

Oh I was here, you just didn't see me.

inb4 bartholen. I reckon he can't wait to see this. Aaw yeah!

OT: It took this long for it to get released in the States?! Goddamn! That blu-ray is gonna take forever... Not that I'm gonna buy it or anything. *cough*

Crazy Zaul said:
They still make movies for a 1995 show?
Click to expand...

Remake movies that decided to go, "Fuck it, we're doing what we want!" around halfway through part 2.0

I can't believe I'm saying this considering I live in New Zealand but I've already seen this movie in theatres. Like Tron:Legacy, I treated it as a movie-length music video.

So has Anno decided to replace his fatalistic depression from the 90s with a new psychosis?
F

What a cruel contest.

Or, and hear me out here... OR, I could go and stare at a piano for two hours.

God this reminds me of that critical miss comic about the red wedding, it's hilarious if you know what's coming but the other person doesn't

Almost worth making a Facebook account just to post
I'm looking forward to seeing all the character development, logical thinking of the protagonists, along with the prospect of anything good that could've come out of the whole of Rebuild of Evangelion get fist-fucked!
...almost.

Oh I was here, you just didn't see me.

inb4 bartholen. I reckon he can't wait to see this. Aaw yeah!

OT: It took this long for it to get released in the States?! Goddamn! That blu-ray is gonna take forever... Not that I'm gonna buy it or anything. *cough*
Click to expand...

I would so want to be there, to see the fanboys' expressions when they see nonsense like "Curse of Evangelion" and "Vessel of Adams" blurted out on screen. Maybe after this the IMDB page for this movie deserves a re-visit, just to see the message boards light up like nitroglycerine in a Michael Bay movie.

Nouw said:
I can't believe I'm saying this considering I live in New Zealand but I've already seen this movie in theatres. Like Tron:Legacy, I treated it as a movie-length music video.
Click to expand...

That first song sounds very similar to the great fairy/file select music from the Zelda games.

I've been curious about giving these movies a watch. I watched through the show and the movie a long time ago. I liked the show well enough, but I absolutely hated the movie. I've heard that the movie was essentially a middle finger to angry fans who sent death threats to the creator over the ending of the TV show. Not sure how true that is, though it would definitely explain a lot.

At least it taught me one very important thing... that people are made of Tang.

Spike Spencer whining like a little *****, while Tiffany Grant berates him in gratuitous german?