Evel Junior To Jump A Volcano

Evel Junior To Jump A Volcano 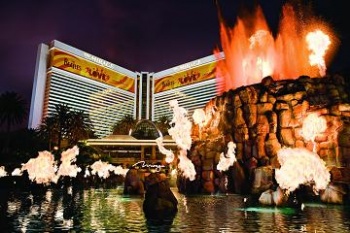 How do you beat leaping the fountain at Las Vegas? Build a volcano and jump that.

Back in the years of flares, there was a "motorcycle daredevil" named Evel Knieval, who wore a white jumpsuit long before Wilma Deering [http://www.wilmadeering.com/].(But didn't look quite as good in it). He was nearly as famous for his daring leaps as he was for his dramatic wipeouts [http://uk.youtube.com/watch?v=kYGGCVE2lKY].

Out in the garden, I would rev up his friction bike and launch him over bigger and bigger obstacles, each time looking for more and more difficult jumps to complete. You've got to wonder if Robbie Knievel had one as well, or if he just said, "Dad did this, I can do better."

Fast forward to New Year's Eve 2008 and Robbie's getting his chance to do something Dad never did: leap over an erupting volcano.

The artificial volcano at the Mirage Hotel-Casino has had a $25m face lift to set it up for this stunt, which I think can truly qualify as epic.

If that wasn't enough, the soundtrack to the jump will be written by former Grateful Dead drummer Mickey Hart.

Robbie Knievel says it's likely to be his last stunt. Let's hope that's not apocryphal.