Even Death May Die: Sandy Petersen Talks Call of Cthulhu

Even Death May Die: Sandy Petersen Talks Call of Cthulhu 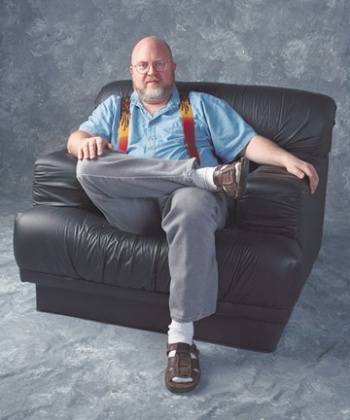 The 7th Edition is due any minute, and here's what the man who started it all has to say about his time with Cthulhu.

If you have any love in your heart for tabletop horror gaming, then at some point you've probably dabbled in the nightmarish vistas of Call of Cthulhu. First released in 1981, the original rule set has been published again and again, with minor variations, ever since, but just a little over a year ago its publisher, Chaosium, decided to Sandy Petersen [https://www.kickstarter.com/projects/448333182/call-of-cthulhu-7th-edition], the designer who started it all, about what things were like back in the day, and what he's looking forward to now.

You've dozens of Call of Cthulhu credits, and are pretty much the main author of the tabletop game. How does it feel to be Cthulhu's godfather?

SP: Well, it's my baby! Let me put it this way. I've designed a lot of games that sold better than Call of Cthulhu. I worked on the original Doom, Civilization, Quake, I was involved in the Age of Empires series that sold tens of millions, but when I'm invited to conventions around the world it's never because of those games. It's always Call of Cthulhu, that's the one people love!

Last year I was at the H.P. Lovecraft film festival, and we talked about how, before 1981, Lovecraft was pretty much unknown. There were a couple movies, a few editions of his books, but few people really knew his work. Then in the early 1980s two things happened: Stuart Gordon came out with Re-Animator [http://www.escapistmagazine.com/news/view/108863-Re-Animator-Musical-Gets-Gory-Extension], and the other was the tabletop RPG. These two things hit pop culture from completely different directions, and from there Cthulhu became more and more of a household name. If you were to ask someone in 1979 who Cthulhu was, they'd have no idea!

I remember when I was doing Call of Cthulhu at Chaosium, the people there had contempt for Lovecraft - they thought he was a hack writer - but they wanted me to work on the game. They were smart; they said 'we don't respect this property, but Sandy Petersen does, so he's the better person to design it!' That wasn't unique to them, by the way; at that time most people who'd heard of Lovecraft, if they knew his work at all, felt the same.

If the guys at Chaosium really weren't into Lovecraft, why did they want to make a Lovecraftian RPG?

SP: Chaosium wanted to work with licensed properties, and there were a bunch of things that happened at the same time. I'm not sure where it got the idea of working with Lovecraft's material, but I had the idea of doing a Dreamlands supplement for Runequest, because I loved Lovecraft, and also I'd worked on a horror themed game called American Gothic. So I wrote Chaosium with this proposition, but Chaosium wrote back saying it already had someone working on a Lovecraft horror game, which as it turned out was a lot like my American Gothic. I wrote back, really excited, and said if Chaosium wanted any help I'd be happy to participate in this project. Chaosium replied saying it wasn't happy with how this guy was working out, so it gave me the whole game to design myself!

That must have been a shock!

SP: I was surprised! But as I was a huge Lovecraft fan, and because I always hit deadlines - a very handy habit to have - Chaosium gave me the job. Now, Chaosium didn't fully respect Lovecraft, and wasn't interested in his work as horror fiction, but it really liked the idea of making a period piece RPG. Lovecraft was writing in the 1920s and 1930s, which for him was modern day, but the folks at Chaosium decided that the Twenties vibe was cool, and it kept Chaosium interested during the editing process. It also meant Chaosium could put out period supplements, which it really liked! Chaosium wanted to write about what was going on in the cities, the social structure, that was what Chaosium found interesting. The horror wasn't as important!

The odd thing, to my way of thinking, is that Lovecraft was trying to write things in as modern an era as he could. He wasn't trying to absorb the ambience of the Twenties, not in the same way that, say, Robert Chambers tries to steep you in Bohemian Parisian living in his stories. Lovecraft wrote about up-to-date things, Pluto's discovery, submarines, airplanes, Antarctic discoveries, all of which fascinated him. He was a futurist.

I prefer a modern style of game. When I'm describing the setting to the players I like it to be somewhere they can reasonably imagine themselves to be, and the problem with a period piece is that there are always questions. In a modern game players know what to expect from, say, the police, from public transport; there's a lot of things they know that I don't have to explain. It's a time saver. Setting it in period adds an extra layer, an obstacle to play. I think a pure horror game is better set in a modern setting, but I can understand why, when people are looking for a horror game that also has an interesting background, people like to set their games in the Twenties, or the Atomic Age, or whenever.

SP: It was a terrific place to work in in every way, I really loved my job, I really liked the guys I worked with, but I was living in a tiny two-bed in Richmond, California, married with kids, and I had responsibilities. If I was single, I'd probably still be there!

You moved on to the video game industry.

SP: Yes. I told the guys at Chaosium I was going to look for other work, and I was at Gencon that year working the Chaosium booth, when I ran into Lawrence Shick, who had been chief of game design at TSR and at that time was working for Id Software [http://www.escapistmagazine.com/articles/view/video-games/columns/experienced-points/8320-Know-Your-Gaming-Roots] and living here in Texas. My wife has set down tap roots about twenty feet deep, so we're not going anywhere!

There's a quote about demons that dates from your time with Id; you told John Romero "I have no problems with the demons in the game [Doom]. They're just cartoons. And, anyway, they're the bad guys." I wonder: in that context, what's your take on the fictions of the Cthulhu Mythos?

SP: They're a terrifying force. Lovecraft's done two things with his Mythos: first, there's a subcurrent of nihilism. If you take a look at his cults and cultists, they're all fundamentally materialist, atheist. They don't believe in an afterlife. Take the cult of Dagon as an example: the cultist's children get physical immortality, and they get gold. That's all they care about; it's crass, not spiritual at all, which I find really fascinating!

The other thing Lovecraft does is he turns the universe upside down. Standing here looking up at the sky, he imagines an endless abyss in which awful leviathans lurk. It's just absolute terror, because we don't know what things are out there, except that they obey different natural laws to our own, so we never know what to expect. In a conventional horror story what you have is people who live in the real world and then there's 'something bad' which forces its way in, but that's not what Lovecraft's about at all. The something bad is the real world!

Now 7th Edition is on its way. What did you think when it was first announced?

SP: I wondered if my name was going to be at the top of the bill! [laughs] I actually talked to Charlie [Krank, Chaosium's President], and he sent me an early version of the new edition. The guys writing it are people I know and have played games with, we've met at conventions, and they're the best game masters for Call of Cthulhu I've ever met. They really ramped up the rules set, and the current 7th Edition is where it needs to be. If role playing games can evolve, then Chaosium wants the most evolved version, but it still has the stuff I put in there, that made it a strong game.

My favourite tabletop experience out there. Probably won't bother with the new edition, because I rarely get to play tabletop these days and when I do I'd rather not have to bother learning new rules. But I hope it continues to entrance new gamers.

It keeps things fairly simple, as I see it, but diverse. And it's just a joy to play, doesn't get you bogged down in long, tedious combat sessions even if you have combat heavy campaigns. (But why would you? Investigation is where it's at!)

Petersen is such a fascinating authority on horror games - I feel like I learn something each time he talks.


Sandy Petersen said:
The odd thing, to my way of thinking, is that Lovecraft was trying to write things in as modern an era as he could. He wasn't trying to absorb the ambience of the Twenties, not in the same way that, say, Robert Chambers tries to steep you in Bohemian Parisian living in his stories.
Click to expand...

Brilliant stuff - and very astute.
A

Sandy Petersen said:
I remember when I was doing Call of Cthulhu at Chaosium, the people there had contempt for Lovecraft - they thought he was a hack writer - but they wanted me to work on the game.
Click to expand...

To be fair Lovecraft's prose style is dreadful, his characters stereotypical and his premises verge on the racist. What he did do very well was mood and tone. The genius of Petersen is that he kept the mood and tone and dumped the rest. The freedom of the pen paper game allowed you go beyond Lovecraft's limitations as writer and allowed you shape his mood and tone into what you will.
Show hidden low quality content
You must log in or register to reply here.
Share:
Facebook Twitter Reddit Pinterest Tumblr WhatsApp Email Link
Top Bottom