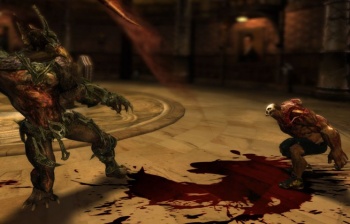 When Namco pulled development duties for their Splatterhouse remake from independent studio BottleRocket, the publisher claimed it was due to "performance issues." BottleRocket has barked back at Namco's claims, however, and this dog is not happy.

Last month, Namco claimed [http://gamasutra.com/php-bin/news_index.php?story=22220] was due to a "performance issue." Namco COO Makoto Iwai explained that "the only reason why publishers pull the project out from the developer is when the developer isn't really meeting the requirements," which left us to presume that BottleRocket wasn't up to snuff.

Now the developer has responded to Namco's claims, and they sound spitting mad. "We too have to be careful of what we say since publishers have to worry about their 'image' and will sue small, independent studios who bark back at them too loudly," the studio wrote in a statement [http://www.gamasutra.com/php-bin/news_index.php?story=22750] published on Gamasutra.

"Game development contracts are put in place to protect the publisher and their interests," they continued. "Within these contracts are a series of defined game development objectives and goals called milestones. If a developer is under performing they tend to fail these milestones and have varying degrees of accountability placed upon them."

As BottleRocket sees it, they were doing everything they'd signed up to do. There were no performance issues. Namco's the one who screwed up here. "Splatterhouse had been in development for over eighteen months and up to having the title taken away from us we had not missed any contractually defined milestones. So either there were no performance issues during that timeframe or Namco's management of the title was inept."

"Inept." Fighting words, to be sure. We haven't heard the last of this. 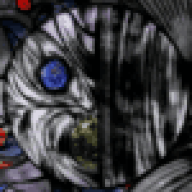 Uh-oh. This could be heading down Judicial Avenue.
T

Maybe they could get some of the game footage from the two developers fighting?

Well, I guess any publicity is good publicity...

But in this case, I shudder to think at the kind of pain Namco Bandai could throw at these guys.

This news has potential suckage - I was sort of looking forward to this game, I hope it still comes out. I played the original back in the day on the Turbo Grafx 16!

Oh oh look out the lil' ones are rebelling!


Will this time the Ewoks manage to overtrow the big intergalatic Empire?

Or will they get sued for everything they have?

Or maybe nothing will happen and we will all forget about it?

Find out next time on UNFORGOTTEN REEAAAAAALLLLLLLLMMMMMMMMMSSSSSSS!!!


(Rob is right its hard to come up with a third option.)

Ah crap... this means the Splatterhouse remake will be slowed down if legal things burst out...
P

Why don't they just quit being whiny bitchs and BOTH work on it? That guarantees a release and no legal issues. 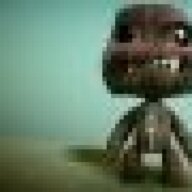 Plauged1 said:
Why don't they just quit being whiny bitchs and BOTH work on it? That guarantees a release and no legal issues.
Click to expand...

And I never played the origional Splatterhouse, heck, I only knew about it because it has been mentioned before. I'm still hooked of SF4 and Fallout 3, so I doubt I will be buying this when it is released. i'm only 3 copies of Pugilism Illustrated and a copy of The Big Book of Science away from having a maxed character, you see.
P

Yeah, but there is a difference between supervision and co-working. They should have someone else monitoring them both as they at least try to make a game. That is why the 2K devs hate Levine, he was putting too much pressure on them and not "contributing himself".(That last part is an assumption, by the way. I always think too far ahead and in my opinion, he gave a story and designs and thats enough.) Why does Namco insist on putting this problem over both companies heads? I'm just saying there are better ways to handle it, and all I want is a good Splatterhouse game, hopefully as good or better than the original two.
Show hidden low quality content
You must log in or register to reply here.
Share:
Facebook Twitter Reddit Pinterest Tumblr WhatsApp Email Link
Top Bottom