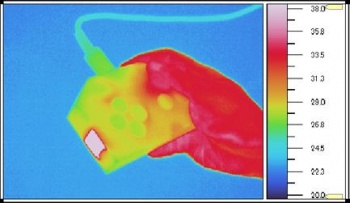 Be careful when touching this new controller: It changes temperature depending on what's going on in a game.

Videogame developers have constantly been looking for ways to make us feel the experience of a game rather than just seeing it since the beginning of the industry. The latest attempt is with an experimental controller that can make players feel differences in temperature.

The currently codenamed ThermoGame was revealed this week at the 2010 SIGGRAPH conference and is described as a "video game interaction system that offers dynamic temperature sensation to users." It uses peltier elements to quickly heat or cool the sides of a controller. Don't worry, because the extremes of each temperature are reportedly not enough to cause any damage to the hands; they're just enough to create a sensation.

Researchers from the Tokyo Metropolitan University and the National Institute of Special Needs Education demonstrated the controller with a game they developed called Eruption Jumping. When the game's robot is near an area of heat or cold, it'll provide that sensation to the player. The researchers determined that it takes a little more than a second longer for users to react to heat than to cold.

This type of controller could be written off as a gimmick, but its creators plan to use it to develop a game system that the blind can play through temperature sensation alone. It could also be used to burn your arm off if you make a misstep into the lava in a Mario game. I'm just saying.

That just seems like there aren't going to be enough practical uses to make a reality outside of labs and such. Also if that happened I can all ready imagine the shovel-ware. "Pro Fishing: Ice lake edition." or "Pro Fishing: Hades Lake of Fire edition."
E

Sounds cool if you were playing Lost Planet or something, but where is the application for a regular FPS?

Ertol said:
Sounds cool if you were playing Lost Planet or something, but where is the application for a regular FPS?
Click to expand...

If the place has any kind of ice area, which a lot of FPSs have (examples: MW2, all the Halos, Crysis, most of the Battlefield games, etc) decreasing the tempature on the most sensitive part of the body should really increase the immersion, or if somebody puts a flame thrower on you, then it should get really hot.
D

This sounds like the DUMBEST idea since the Sony Move.

Ugh.....this is a lawsuit waiting to happen.

The idea behind the tech is interesting enough, but it just doesn't seem like it would be all that useful or even necessary from a practical standpoint.
H

It would be the coolest thing ever if they didn't tell us about it and just put it in every controller.

Digikid said:
This sounds like the DUMBEST idea since the Sony Move.

Ugh.....this is a lawsuit waiting to happen.
Click to expand...

"I got burnt by this here thingummy I bought. The warning label did not specifically state how badly burnt I would become. I demand money for my pains!"

This would be great, even just for keeping your controller nice and frosty while you game. I hate having to wipe palm sweat off controllers.

Also, along with standard vibration the heating would make for a relaxing massage.

Edit: Just thought of a neato use for it: What if you're playing a spooky game like Silent Hill, and the game tells you an enemy is near by making your controller cold, giving you chills. That would be awesome. 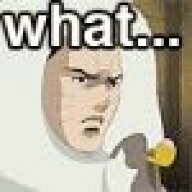 Ertol said:
Sounds cool if you were playing Lost Planet or something, but where is the application for a regular FPS?
Click to expand...

Yes, i can imagine the increase in immersion. I remember there was the amBX system a few years ago which used similar things (lights control, temperature changes, wind), but it didn't sell in any serious amounts because it was expensive and was only supported by a few games.

Sounds like the rumble feature. I.e. Annoying and not-at-all immersive. 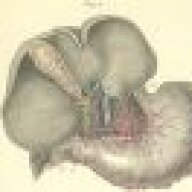 y'know what... screw the immersion factor, just let me turn on the cold or heat whenever I want.

Your hands are sweating? Well turn on the cooling mode!

Just got in and your hands are too cold to game? Turn on the heat! 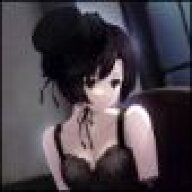 We can now blindfold people and play "Marco, Polo" on consoles?

This will be interesting.

I beg to ask the question; how much?

Yes, because guns don't shake at all when you're firing them. What were they thinking.

And now they're adding heating? That's another thing guns totally don't do.

Am I the only one who saw this and immediately thought of the "temperature-dependent memory alloy" in the original Metal Gear Solid? And here I was thinking that we could freeze the controller to make it take on a completely different shape.

This is an awesome idea, though. It won't be groundbreaking in terms of immersion, but it can definitely help, at the very least.
C

This is actually a pretty good idea. Plasmids from Bioshock would be so much cooler if when you had Incinerate! out you actually felt the heat.

Yes, because guns don't shake at all when you're firing them. What were they thinking.

And now they're adding heating? That's another thing guns totally don't do.
Click to expand...

Look, I'll be kind and give you a quick tip: don't give a sarcastic reply when you either a) Don't know what immersion is or b) Haven't read what you're replying to properly.

Yes guns shake and I imagine they get hot, that doesn't make it more immersive when your controller does that. It's the same reason motion controls are less immersive than gaming with a mouse and keyboard or gamepad: you're being brought back into the real world.
Show hidden low quality content
You must log in or register to reply here.
Share:
Facebook Twitter Reddit Pinterest Tumblr WhatsApp Email Link
Top Bottom