[vimeo=15266890]​
A fan-made opening sequence for AMC's The Walking Dead might just be the best intro to a TV show you've ever seen.

There were a lot of big reveals at Comic-Con this year, though one of the biggest was the unveiling of The Walking Dead TV series. The show looks like it'll be a fairly faithful adaptation of <a href=http://www.amazon.com/Walking-Dead-Book-Bk/dp/1582406197/ref=sr_1_1?s=gateway&ie=UTF8&qid=1285609492&sr=8-1>Robert Kirkman's zombie apocalypse comic, but information about the series has been rather sparse <a href=http://www.escapistmagazine.com/news/view/102406-Walking-Dead-TV-Series-Trailer-Comes-To-Life>since the announcement trailer was shown. However, a fan-made set of opening credits look so good that the show's producers might very well want to add them in.

The credits were created by Daniel Kanemoto, who animated artwork from the comics themselves. Kanemoto is a talented animator/director who's done a number of animated shorts, opening sequences, and commercials. According to Kanemoto:

My favorite "exclusive" from this year's Comic-Con was a beautiful painting by legendary artist Drew Struzan, featuring a horde of zombies from The Walking Dead. Frank Darabont is adapting the apocalyptic Image Comics book created by Robert Kirkman, and man, it looks really, really great.

As I was admiring Struzan's work of art, I wondered what the opening titles to this terrifying new television show might look like... so I animated a spec title sequence using artwork ripped from the pages of the comic, originally illustrated by Charlie Adlard and Tony Moore.

Just so there's no confusion, I'm not affiliated with the production in any way -- I'm simply a huge fan of both Frank Darabont and Robert Kirkman, and this is my attempt at creating a cinematic introduction to one of the all time great "continuing stories of survival horror."

Kanemoto's credits look pretty fantastic. I've been a huge fan of Kirkman's series for a while, and I particularly like how these credits pay homage to the comic it's based on while still keeping feelings of desperation, remorse, and constant danger. The show is set to start airing on October 31 on AMC here in North America, though it's unknown who will broadcast it overseas.

This has earned my endorsement.

I absolutely cannot wait for this series.
S

This is truly a masterwork; the producers would be utterly foolish not to utilize Mr. Kanemoto's talents, clearing rights by him and his choice of music.

I eagerly await TWD series and absolutely feel that original art from the books is the only way to introduce itself.

Does anyone know the song and artist featured?

Wow, another AMC show I get to watch. It's a go to network these days with Mad Men, Breaking Bad, Rubicon and now this.
P

Wow! That just blew my mind. I hope they use this, because I don't think there is much the producers can do to improve upon this.

That is one of the best things I've ever seen

Looked absolutely amazing. The music reminded me of the Hellsing intro somewhat.

I was thinking, meh, flash animation, seen it before and then that stab at .40 makes it brilliant. Beautiful that, perfect pacing and timing.

That's something special, hope the series at least half measures up.

slutsdigme said:
Does anyone know the song and artist featured?
Click to expand...

The song is Fresh Blood by Eels.
C

That's amazing looking but they've probably already paid thousands of dollars for opening credits or they go with some sort of cold opening like Lost with just the name of the show, shame really 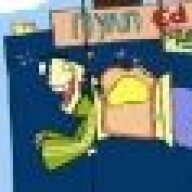 That was pretty cool.

Fnantastic! Especilly for something fanmade!
S

My thanks to you, sir!

That opening really is badassamazingfantastic. Realistically, there's a .0008% chance they'll actually use it. The show is coming out in a month, I doubt they'll make any last minute changes due to a guy on the internet.

If they do use it, I will come back to this thread and hand out free Fried Oreos to everyone on it!