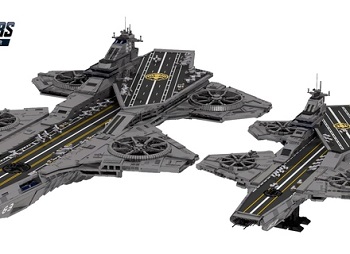 LEGO builder YoSub Joo's custom helicarrier model is up for official review after achieving 10,000 supporters in his LEGO Ideas campaign.

S.H.I.E.L.D. helicarriers are what we in the business of professional nerdom like to call "the bees knees." Sure they're kind of preposterous and, if memory serves, one was almost taken down by an arrow in The Avengers. Even so, we challenge you to find anything (besides giant robots) cooler than a flying aircraft carrier filled with superheroes and secret agents.

The sad thing, of course, is that none of us will ever be able to own helicarrier. Even if they existed in the real world the cost of building and maintaining one would be so high that even the defense spendiest nations of the modern world would probably be taken aback by the prospect. That said, if you're willing to settle for the same package on a slightly smaller scale, then a recent LEGO Ideas success might be just what you're looking for.

Were talking, of course, of fan builder YoSub Joo's Avengers Helicarrier. Launched as a <a href=http://www.escapistmagazine.com/news/view/133966-LEGO-CUUSOO-Being-Replaced-by-LEGO-Ideas>LEGO Ideas campaign earlier this year, it recently reached the 10,000 supporter threshold it needed to be considered by the company for the opportunity to become an official set. The company reviews potentials <a href=https://ideas.lego.com/guidelines#anchor-5>three times a year. Sadly, Joo's helicarrier missed the deadline for September's reviews, which means we'll have to wait until January to find out if it will earn official status.

And while there's no guarantees that it will be chosen, the odds are arguably in its favor. Setting aside the fact that both of Joo's models (<a href=https://ideas.lego.com/projects/63951>22,000 piece original and <a href=https://ideas.lego.com/projects/63951/updates>6,700 piece redesign) are amazing, <a href=http://www.escapistmagazine.com/news/view/136080-LEGO-Builds-Representation-With-Female-Scientist-Set>LEGO already has a very successful <a href=http://marvelsuperheroes.lego.com/en-us/default.aspx>Marvel Super Heroes line that this helicarrier would fit right into. Put shortly, we'll be watching with bated breath come January to see if Joo gets his due.

I'm confused on why it has the number 63 on it. According to Wikipedia & some images it should be a 64. And how would a SHIELD Helicarrier even fit into the category of Rule 63?

And to think I contented myself by making houses with my legos.

Probably will cost as much as a real one...

I'll start saving up now for it...

truckspond said:
I'll start saving up now for it...

Once it comes out I hope they have a preorder because it will sell fast
Click to expand...

Just keep in mind that it isn't confirmed to be coming out just yet. It still needs to pass the LEGO Group's official review in January. Fingers crossed!

StewShearer said:
Joo gets his due.
Click to expand...

Kidding aside, this would make an awesome UCS set. I'd love to have one of these to go along with the B-Wing and the R2-D2 UCS sets. I wish I had the Executor too, but I didn't have the dosh when it was readily available and I'm not paying premium eBay prices for it. C'est la vie.

Lego will erase most of the details which make this so impressive and overprice it like always.

I hate to break it to everyone, but this has such a low chance to make it past review that it might as well be zero. Getting 10k votes for an ideas project does not mean Lego will make it. Essentially all it does is get your project pitched to a review committee to see if it is a viable product. This monster is not. The creator built it digitally,mso without the restrictions on size, weight, gravity or costs of materials. The proposed product would have the shipping weight of a small car, cost several Thousand dollars, and be large enough to use as a coffin. The largest Lego set ever produced was 7,000 pieces. This thing is 10x that. They can't reduce it too much without invalidating the project voted for. Add to this that it is a project based on a pre existing and active licensed theme, which is much harder to get through review, and it dies a short quick death the moment it hits the review committee.
N

faefrost said:
The largest Lego set ever produced was 7,000 pieces. This thing is 10x that.
Click to expand...

The article mentions a redesign that used 6,700 pieces.

The smaller redesign came into play late in the game. Most fans voted for the full Subaru sized Helicarrier. While Lego will make changes to ideas sets to convert them to production sets, and fans may and do refine and update their projects there is an element of "how far" can they go before it stops being the project people voted for?

Lego may do a large Ideas set at some point. Something in a $200 price point. By my prediction and analysis, when they do it it willl at least initially be something that they already have tons of good data on. Something that has worked as fan designed limited release large sets before, like Technics or a Modular style building. The Helicarrier has too many negative coming in the door. Even if they were to scale it down to a standard UCS type set they then run afoul of the existing license, which has the expectation that they can and will make such a product internally.