What would you call it?
Because all I see is a lady who got a kickstarter setup and made a mint by stirring the shit pot, and how a bunch of immature trolls responded.

If goes ahead and makes a game/movie with the movie, fine. It's her right.
I honestly don't see what is so special about her or her message that it deserves such attention.
Click to expand...

I mean, unless you're saying tackling any controversial issue is trolling, because what she's doing is really no different than anyone else who looks at controversies "for profit."

Zachary Amaranth said:
I mean, unless you're saying tackling any controversial issue is trolling, because what she's doing is really no different than anyone else who looks at controversies "for profit."
Click to expand...

From what I've seen of Ms. Sarkeesian's videos and works, she's only too happy to condemn the industry (fine, they aren't above criticism) but what is her plan or agenda?
The only thing that's been made clear is "stop treating women like objects in video games", which isn't exactly treading any new ground here.

What is it about her works specifically that merits such rage and trolling, and why does it keep going back and forth without end?
J

JerrytheBullfrog said:
I realize that quite well, thank you very much. I'm beginning to think that you don't, considering that you're mistaking the criticism of one with the criticism of another.

Ask yourself this: Why is she criticizing Kanye's video instead of criticizing, say, Lady Gaga's videos, wherein she wears plenty of skimpy clothing? A crucial difference here is that of "agency." That is, who decides what the women are to be wearing? In one, it's the women - Lady Gaga wears what Lady Gaga decides she wants to wear. Maybe this IS for the titillation of a male viewer, but it's still the woman's choice to do so, much like it's her choice to do so IRL. In the other, it's the men - the women wear what the men want them to wear to titillate the male viewer. They have no agency.

I'm actually kind of stunned that you don't see the objectification here. Most of the women in this video are portrayed as dead. They're lifeless and immobile, only around for their physical appearance in lingerie. Hell, in one scene Kanye is physically rearranging them! They are literally being portrayed as objects, not people. The message here is that the artists in the video choose to surround themselves with women in lingerie for no reason other than that they look sexy in lingerie. It is ABSOLUTELY exploitation and objectification of the highest order, and that you insist that she's just criticizing "Women in lingerie = bad" just kind of makes me think that you... honestly don't understand what she's getting at.

A woman may have designed Bayonetta, but it was men who decided how to portray her in game. Is the character designer responsible for the lascivious shots panning over her crotch and ass? Probably not.
Click to expand...

SO because a man told the women to dress that way(regardless of purpose) it is objectification. Bull shit. As said before, the women in the Kanye video serve as background dressing. Extras functioning as props for symbolism. They wore clothing normally regarded as sexy but were not sexualized. Yes, they wore less than modest clothing but the point was not 'check these bitches being half naked'. There is a reason most of the girl is obscured by lighting. Point is her criticisms are a glancing blow. It scrapes the top but doesn't bite deep into the meaning or purpose of the song. She see female extras playing dead while wearing lingerie & cries misogyny without exploring any possible meanings, she sees the difference between white & black women's portrayal here & cries foul in the same manner. She watched the video, saw something that pissed her off, & opened fire. She did not decide to think maybe that wacky kanye is trying to say something that's not 'i hate women'. But both of you jump straight to crying misogyny, no analysis of the lyrics or exploration of possible purposes, straight to the misogyny.. My favorite analysis of the song is multifaceted, that its a commentary on white/black politics, the music industries 'meat grinder' business practices, a look at what fame can do to you, & a glance into the past. But im sure its all misogyny & demonetization of women because that's what the patriarchy do. The video is not the ramblings of a misogynistic madman, its got purpose. At any rate, titillation is not the word i would use to describe any of the girls in the video, the idea of a dead girl is not sexy to most people. necrophilia is still a very small niche.

She designed the characters appearance & behavior. But regardless of gender of the person executing this, a man making the character does not automatically invalidate their sexuality, or that they were made to harm/spite women.

Before this goes forward you will define, misogyny, sexual objectification, exploitation, sexualization. Particularly how YOU define them. Otherwise this will be unable to progress any further.
Click to expand...

No, because *someone else* told them to dress that way for the benefit of a viewer, not because they chose to dress themselves that way. It could have been a woman; they are still being objectified.

If the video is, as you say, about the music industry's meat grinder, why are there no men found in similar attire/state of literally being reduced to objects? There is a undercurrent here equating death to the sexual objectification of women, and I can hardly blame her for being a bit disturbed.

A man or a woman making the character does not make much of a difference. If a woman decided to do panning shots over her crotch or frame shots with her legs and ass, it'd still be objectification. It is admittedly trickier in Bayonetta given that it's such a stylized parody, but when Bayonetta is one of the few games that even have any pretense at letting the female characters SOMEWHAT "own" their sexuality (and even then, it's just as much playing the objectification angle straight as it is attempting to subvert it, so...)

Sexual objectification - the reduction of a character or human being into an object. Taking her (or his) body and prioritizing it above any message or personality or character they could have, because they're trying to use sex to appeal to an audience. It's women in videogames and comics wearing high heels to the battlefield just as much as it is women with big breasts jumping on trampolines.

Exploitation - Difficult to summarize. Someone using the identity of someone else as a tool for marketing/appeal/whatever, generally to an audience outside of that which is being exploited.

Sexualization - A character or person being sexy, or presenting in a sexual manner. This may be exploitation/objectification if done at the command of another. This may however, also be an individual's choice. (Assuming it's a person. A fictional character has no agency in how she or he is presented).

Misogyny - I'm just going to link a good quote here. "There are some bad bad man-hating bitches and still they don?t make misandry a meaningful word-idea that deserves equal status opposite misogyny. Misandry is not a system and it does not oppress; misogyny is and does. Misogyny is, among other things, men hating women without knowing why, only fearing. It?s men failing to empathize with women because empathy is sharing power, and no traditionally ruling class wants to share."

So to just write misogyny off as literal "hatred of women" is understating it. It is the system of oppression that enables such hatred and minimizing.

Atmos Duality said:
There's a difference between tackling controversy for the sake of action (advocating change) and for the sake of just stirring the shit pot for profit.
Click to expand...

Except nothing you've said, nothing that's been said here at all, indicates she's in the latter category.

You condemn her because your overly glib interpretation of her prior works involve her just saying "the industry is bad" without offering a solution. I've looked at her prior videos, and your portrayal is simply wrong.

Also, "what is your plan?" Bad for the bush Administration, bad for any argument.

What is it about her works specifically that merits such rage and trolling, and why does it keep going back and forth without end?
Click to expand...

What do you mean about her works specifically? This happens to virtually everyone who has such views. For someone who thinks it's just the same stuff over and over again, you must surely have recognised the related pattern of dismissal, trolling, hate threads and death threats.

Zachary Amaranth said:
Except nothing you've said, nothing that's been said here at all, indicates she's in the latter category.
Click to expand...

Fine. She isn't a troll. Just the asshole White Knights who defend her at every turn are, given how I can't go to any of my normal sites without this topic being front-and-center.

I got really tired of it, and said something out of a moment of anger. At the time, I thought she was another feminist who talks a lot of shit, but provides no alternatives (a personal pet peeve of mine are people who complain and advocate for change, but abjectly refuse to provide even a simple solution).
Her work is more analytical, which is to say, more about identifying the problem.

As for her work, I'm not against stronger feminine characters, but this is a problem with NO SOLUTION so long as gaming companies stick to their hyper-conservative routine: Which means pandering to the safest, most proven demographics.

Beyond that, I don't know what the hell you have against me, but I'm tired of it. I'm tired of White Knights on the net, and I'm tired of this topic especially. 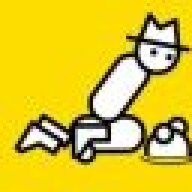