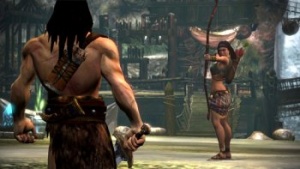 Age of Conan [http://www.funcom.com/] via a post on the official game forum.

In the post, discovered by Ten Ton Hammer [http://www.tentonhammer.com/node/37257], Funcom designer Svein Erik "Sharum" Jenset explains that while one aspect of the bug was a fairly simple matter to patch, the game's "combo damage" system is far more complex, requiring considerable effort to correct. Combo damage involves several factors when determining damage, including stat/modifier/multiplier, which themselves can be affected by class, level and weapon, length of attack animation and more.

"The main reason for the discrepancy in damage output that you're seeing is that the length of an animation isn't equal for both male and female characters in many cases. This is what we're currently fixing, but there's roughly 800 to 1000 animations in total that are involved here, and that they are significantly more 'complex' than the 'white (standard) damage' animations mentioned above this naturally takes a lot more time," Jenset wrote. "Of course, once the length of the animations have been fully corrected/tweaked either by an animator or BCC designer then every rank (of every combo for every class) has to be rebalanced by the System Designers because, as I mentioned above, one of the factors that come into play when determining the combo damage is animation length."

Jenset said that Funcom is currently aiming to have the problem largely rectified and tested within two to three work-weeks, although QA verifications could delay the process as the company takes steps to ensure nothing else ends up broken as a result of the changes. The game will not be patched on a class-by-class basis, he said, but rather via a single major upgrade that will fix all classes simultaneously.

"I know that many of you will probably be disappointed to hear that it might take us as much as another three to four weeks to solve this issue, for which I can only apologize, but we want to make sure that we devote the amount of time that an issue of this magnitude and importance deserves rather than rush out a 'quick fix' that might not work as well," he added.

The bug was YouGamers [http://www.escapistmagazine.com/news/view/84440] reviewer, resulting in 25 percent less damage over time. Funcom said the difference was entirely unintentional and promised to look into the issue.

More information is available on the official Age of Conan forums [http://forums.ageofconan.com/showthread.php?p=1314170].

Well, you have to have animation time for the 'jiggle', don't you?

Maybe I'm a sucker for a good story, but their reason doesn't seem all that far-fetched to me.

thebobmaster said:
Maybe I'm a sucker for a good story, but their reason doesn't seem all that far-fetched to me.
Click to expand...

I'm a level designer as a hobby and only occasionally make model props, however their story doesn't seem very good when even I, someone who hasn't done any serious animation knows that animations for male and female sequences must be the same length, because it actually takes more work to get them in game when you make them different lengths, so they either did this intentionally or their animators don't know something a level designer does..

The reasons for the bug make sense to me, although frankly its a pity this didn't come to light during testing.

Am I the only one who isn't opposed to this bug? I'm tired of gaming experiences being the same no matter what you do with your character, it makes customization a side-note. Make a guy and he does more damage with bigger weapons, girls attack slower with bigger weapons but attacks faster with smaller weapons, longer hair causes worse aiming, etc, etc. I understand that it was an accident, but they shouldn't change it, they should add on to it, people who want an easier game will tweak their character to avoid the negative character aspects and those looking for a challenge will add all the negative characteristics, and if you want to make a character however you want, you'll have to deal with the negative aspects of your character (there can be positive too but I'm too lazy to think of them)

I think that customization like that is fine, but it needs to be balanced, Damien - from what I've read hear (so it could be wrong, of course) female characters just do less damage with all weapons. Further, I think the problem is that is can limit the range of characters available - after all, if you wanna be a huge Amazon warrior who uses warhammers (not accurate, as I'm making this up as I go without game-knowledge) if your character is just going to have less damage per second than an equal male, whats the point?

Well honestly, you find me a girl, trained from birth who can kill people with a giant hammer better then a guy trained from birth. Right now, yes it isn`t balanced, but thats why I said to add on to it, balance it (although if your looking for realism it wouldn`t be balanced)
A

If you think this is buggy you should see dawn of war without patches.

Some tanks have multiple identical guns mounted on different sides of the vehicle. Some of these weapons do more damage, aim better or can spin further then their counterpart. Ontop of that, certain infantry does more damage then normal while firing in a certain direction and there are also reports of grenades behaving differently depending on what weapon the guy who throws them is equiped with(not range but actual damage). And then there's the fact that some weapons do either 0 or 1 damage against certain armor types when not intended to.
Show hidden low quality content
You must log in or register to reply here.
Share:
Facebook Twitter Reddit Pinterest Tumblr WhatsApp Email Link
Top Bottom