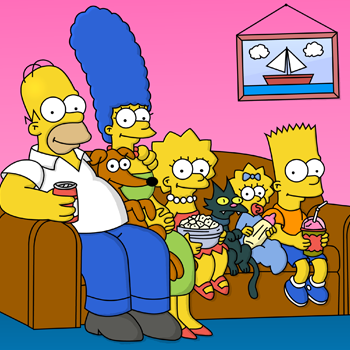 Every single adventure of Bart, Lisa, Marge, Homer and Maggie to be aired continuously for the first time.

Cable network FXX has announced plans for what is being called "the longest continuous marathon in the history of television;" airing all 552 episodes of The Simpsons from August 21 through Labor Day of this year. The event will celebrate the arrival of the legendary animated series to the network's regular schedule, which is already set to include four hour Simpsons blocks on Sunday nights.

Because certain contracts arranged in the early days of the series (when cable reruns would've been an afterthought at best), The Simpsons was not able to be syndicated on cable networks until this year. Last November, FXX won the bidding war to aquire the rights for a gargantuan $750 million. The arrangement also includes making the entire Simpsons archive available for streaming on-demand via the FXNow app.

They should sneak in episodes from later seasons into some of the earlier ones, and watch as fans run their mouth about them being "so much funnier" and "it sucks now" as they laugh uproariously at the very episodes they mock. Oh, the ironing!

Or just say they'll do that and then everyone will be on edge.

Forget fire & brimstone, this is my personal idea of hell - a 12 day marathon of this awful show. I'd be convulsing and foaming at the mouth by the end of it. I couldn't even sit through one episode of this oh-so desperate, attention seeking "you must laugh at me now" show. The only thing that's worse is all its fans insisting how clever and amusing it is. Just my opinion, mind.

I'm not gonna pass judgement as quickly as the other commentators because I haven't seen any Simpsons episodes past the 10th season. Mostly due to getting satellite TV in 2000 and the lure of cable channels like Cartoon Network and Discovery made network TV less important on my viewing list. Now that I've got a DVR and with this marathon coming up, I can finally catch up. Then, I will decide whether or not the show still holds up past the 10th season.
P

..."quagmire" is more befitting the situation. Don't get me wrong, I like the Simpsons, but a 12-day marathon is terrible for anything. Ever. Take even your most favorite thing in all of existence and go "that, I want to only do that for 12 days straight."

This is just supposing that I cared about what FXX does... or even about cable. Which I don't. But a bad idea is a bad idea, no matter who cares. Just saying. 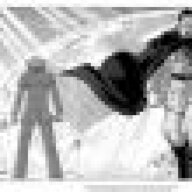 They used to do that here in Australia when the Olympics or Commonwealth Games were on. It was great didn't matter what time of the day it was, whether I had just gotten home from work or just woken up, I would flick on the tele and one of my favourite shows would be there to entertain me Recently during the games they have added other shows like family guy and american dad and such, but for me when it was just the Simpsons were the ones I enjoyed the most.

Sounds like more of a test of endurance to me. Ill just watch the last day to see of any new ones i mightve missed. At least their humour evolves with time unlike certain shows that try using the same old gags like soggy rags or seeping tea bags.
Plus its nice to see the different levels of humour attained that one cannot appreciate as an over-privelaged child.

Pebkio said:
"Epic" is not the word I would use...

..."quagmire" is more befitting the situation. Don't get me wrong, I like the Simpsons, but a 12-day marathon is terrible for anything. Ever. Take even your most favorite thing in all of existence and go "that, I want to only do that for 12 days straight."

This is just supposing that I cared about what FXX does... or even about cable. Which I don't. But a bad idea is a bad idea, no matter who cares. Just saying.
Click to expand...

In my house we put on either The Simpsons or Law and Order by default, if we're just around the house and not doing anything in particular.

It's actually not a bad way to do it; compared to The Simpsons, most other shows either aren't funny enough to still be entertaining when you're only paying half attention, or the characters get irritating after more than a handful of episodes.
S

Not to interested in the marathon, but it's cool to know I can watch the Simpsons online or on TV without it being pre-empted by baseball/football/competitive eating every week.

I doubt there are THAT many hardcore Simpsons fans.
A

Too bad nobody watches that channel. I AIN'T PAYIN' FOR A WHOLE CHANNEL JUST TO WATCH SUNNY!!!

This seems like the kind of thing I would have cared to tape when I was younger, infact I actually did that with a complete Ed Edd n' Eddy marathon about six or seven years ago (I wish I'd saved those, considering how proud I was at the time to have the whole series). But that marathon was to commemorate the end of the series (even though there was still technically one more released after that), I fail to see the point of this one unless... no theres... there's no chance of that happening.
Show hidden low quality content
You must log in or register to reply here.
Share:
Facebook Twitter Reddit Pinterest Tumblr WhatsApp Email Link
Top Bottom