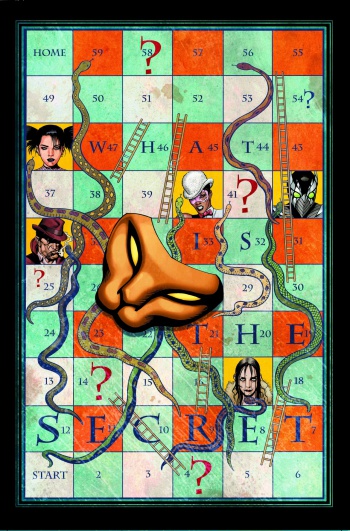 After much speculation about her first post-Batgirl title, Gail Simone opens up about her next project for DC Comics.

After announcing the The LA Times [http://www.escapistmagazine.com/articles/view/comicsandcosplay/12138-Captain-Carrot-and-Gail-Simone-s-Batgirl-In-This-Week-s-Comics-C.2], Simone's next series will be a relaunch of Secret Six, in DC's New 52. Confirmed characters appearing in this iteration of Secret Six are Black Alice, and Catman, who is getting a new look from artist Dale Eaglesham. Eaglesham is doing covers for the series as well as character designs. Artist Ken Lashley (Superman: Doomed) joins the team as the interior artist. Secret Six #1 is due out December 3, 2014.

Simone describes the new series as "the 'Twin Peaks' of superhero comics", and Eaglesham's cover for the first issue hints at a major mystery. Simone told The LA Times that the series will open on six strangers, trapped in a room, with no idea how they ended up there. "They instantly do not like each other, and they instantly do not get along with each other," says Simone. The remaining four members of this new Secret Six have not been revealed, but Simone promises that it "is going to be a very dangerous, sexy book."

Simone previously penned the Secret Six relaunch that began in September 2008 and ended in August 2011 after 36 issues. That iteration also starred Catman, who was joined by Deadshot, Scandal, Rag Doll, Bane and Jeannette. Simone's run on the book was nominated for the 23rd GLAAD Media Award for Outstanding Comic Book. Simone confirmed in the LA Times interview that when Catman returns, his bisexuality will be canon. "You're going to see right away kind of what Catman's about," says Simone. "I don't want to reveal too much just because it is part of his character and part of his story to unfold these things through the story."

With Simone leaving Batgirl, a brand new creative team [http://www.escapistmagazine.com/news/view/136036-Batgirl-Gets-New-Costume-Creative-Team] is joining the series as of this October. Look for Batgirl #35 on October 8, from writers Cameron Stewart and Brenden Fletcher and artist Babs Tarr.

This is awesome. Simone's last S6 run was imo one of, if not the best written series of it's time. (Although to be fair most of it's competition was pretty bad, especially DC's more famous teams like JLA and Titans) Here's hoping she can make this new version just as good.
E

More syringes in the eyes please.

Maybe I will give a New 52 book a chance after all. Gail doesn't often disapoint, maybe she can reintroduce Deadshot's facial hair, he needs more than that though. As a cranky old man I only read Gail Simone and John Ostrander stories now. My other old mainstay seems to have spent his creative force after the great Flex Mentallo.

Batgirl has been one of the few non-Batman/Detective Comics New 52 comics that held my interest. Perhaps I'll have to start following this new one, too (though I know pretty much nothing about the characters; wasn't much of a comic-book-person up until about two months ago).
R

I absolutely adore Gail Simone's work! I didn't have much appreciation for most of the Secret Six members on an individual basis before I read Secret Six.

Sadly, I don't think Scandal Savage, or Knockout will be in this one, which just kinda kills me. IMO, they were probably one of the greatest, and unconventional couples I've ever seen in comics. They were about to have a 3-way wedding between 3 women! But the series got kaboshed before they could... A quick, somewhat abrupt end that didn't feel right to me. *Conspiracy music*
Needless to say, the characters are great.

I don't normally look forward to comics, but I'm looking forward to this one.